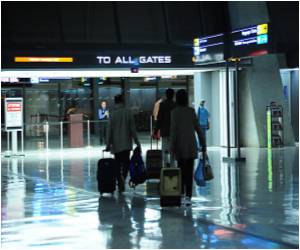 People who travel frequently for business ups the rates of poor health and health risk factors like obesity and high blood pressure, found in a recent study.

Catherine A. Richards, MPH, and Andrew G. Rundle, DrPH, of the Mailman School of Public Health at Columbia University compared health risks for employees at different levels of business travel.

They used data on more than 13,000 employees from a corporate wellness program. Close to 80 percent of the employees travelled at least one night per month. Nearly one percent were "extensive travellers"-on the road more than 20 nights per month.


Employees who did not travel at all were actually a less-healthy group. Compared to light travellers (one to six nights per month), non-travellers were about 60 percent more likely to rate their health as fair to poor.

Blood pressure is the pressure of the blood flowing through your blood vessels against the vessel walls. Just by entering you age, you can get the accurate range of blood pressure value.
Advertisement
This may reflect a "healthy worker effect", with employees who have health problems being less likely to travel.

Otherwise, rates of less-than-good health increased along with nights of travel. Extensive travellers were 260 percent more likely to rate their health as fair to poor, compared to light travellers.

The study has been published in the April Journal of Occupational and Environmental Medicine.

How many times have you stayed awake in the dead of the night counting sheep? If it is fairly often then you could be suffering from a sleep disorder!
Advertisement
<< Evolution of H1N1 Virus Could Pave Way for Better Diagnosis
New Test to Detect Acute Pancreatitis >>

Sanatogen Diaphragmatic Hernia Noscaphene (Noscapine) Turmeric Powder - Health Benefits, Uses & Side Effects Blood Donation - Recipients The Essence of Yoga Nutam (400mg) (Piracetam) Color Blindness Calculator Blood - Sugar Chart Find a Hospital
This site uses cookies to deliver our services. By using our site, you acknowledge that you have read and understand our Cookie Policy, Privacy Policy, and our Terms of Use