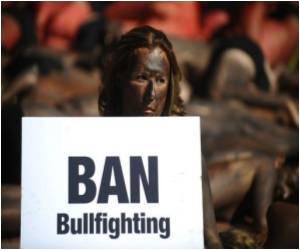 While animal-rights activists are severely attacking against bullfights, food banks in southern France defended a decision to accept meat from bulls brutally killed in local bullfights.

The meat, worth about 5,000 euros ($6,095), was donated by local slaughterhouses to food banks in the Vaucluse region from the remains of six bulls killed on Sunday in a bullfight in the town of Chateaurenard.

Catalans are going to show they are not amused when the local parliament votes on whether to ban the practice of bullfighting, and if it does so, the practice would get its death blow in Spain.
Advertisement

"Would it be reasonable to throw away and destroy this meat instead of donating it?" Maurice Lony, the head of France's federation of food banks, asked in a statement.


The donation sparked angry condemnations from animal-rights groups after it was reported in the local press.

France's FLAC anti-bullfighting federation urged the food banks to reject the meat, which its spokesman Thierry Hely said was the result of "particularly revolting suffering".

Well-known Spanish bullfighting entrepreneurs are vexed with the bullfighting ban and have vowed to take Catalonia's parliament to court.
Advertisement
"For us this is an ethical problem.... This meat smells of barbarism," he told AFP.

But Lony said it would have been unethical for the food banks to turn down the meat, which he said could be used in the equivalent of 10,000 meals.

"We recognise the rights of organisations and individuals to be indignant at the practice of bullfighting. But for our part we're indignant at the lack of proper food security experienced by nearly 23,000 people in Vaucluse," he said.

Banned in the rest of the country, bullfighting is allowed in parts of southern France as a traditional activity, despite complaints from activists that the sport is a form of animal cruelty.

Prize Bull To Be Cloned By Spanish Rancher

El Pais reported about a Spanish rancher who has ideas to clone his most-prized bull. If done, his would be the maiden attempt in the history of bull fighting.
Advertisement
News A-Z
A B C D E F G H I J K L M N O P Q R S T U V W X Y Z
What's New on Medindia

Why Do We Eat - Nutrition Facts
News Archive
News Resource
Advertisement
News Category
JUUL E-Cigarettes Banned from US Market Busy Americans Get The Least Sleep At 40 Years Deepika Padukone Rushed To Hospital After Sudden Chest Pain Vegans, Vegetarians and Fish Eaters Have Better Memory Than Meat Eaters How to Reduce the Risk of Acute Kidney Injury By Drinking Coffee?
More News
Sign up for Wellness Consult a Doctor Sign up for Selfcare