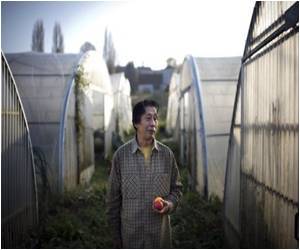 Asafumi Yamashita, a former boxer and semi-professional golf player, lives half a world away from his native Japan, near Les Mureaux the far western suburbs of Paris, where he used to tend bonsai trees for a living.

That was until the day he decided to change tack to become a vegetable farmer -- learning the trade from scratch.


"At first I sold my vegetables to Paris' Japanese restaurants, but I found their standards weren't high enough," he said. "You know, if a Japanese chef leaves Japan, it means his career has been a failure."
Advertisement
Yamashita grows around 50 varieties of vegetable, all of them Japanese -- "even the tomatoes" -- on a plot almost 3,000 square metres (32,000 square feet) in size, half of it covered with greenhouses.

"What I'm aiming for is not rarity -- it's quality," he said as he chopped slices off a kabu turnip with a machete, handing them over to taste.

Crunchy and juicy as an apple, firm yet tender, sweet with a hint of mustard at the finish. Yamashita can deliver 120 pieces per week at most.

"This is a guy who will tear out a bunch of corn cobs so that the ones that are left can grow better," said Briffard, who holds two Michelin stars for his kitchen at the Georges V luxury hotel in Paris.

Passionate about Japan, and with roots of his own in the French rural world, Briffard has worked with Yamashita for years and often travels out from the centre of the capital for a walk around his gardens.

"It is amazing how much quality is hidden here, behind his little house lost in the countryside, the density and depth and concentration of his vegetables," Briffard said. "His sweet potatoes are a little transparent, and his tomatoes are smooth to the touch like peaches."

The chef and his prized supplier talk on the phone several times a week.

"There are tiny seasons that you mustn't miss, like the moment when peas are tender and juicy, before the starch comes in," he explained outside one of the farmer's greenhouses.

This winter, the chef's team are serving up Yamashita's daikon radish, his turnips and red Kyoto carrots, as well as his kabocha, a Japanese variety of squash with green skin and bright orange flesh.

"If you steam it you can eat the skin. Or you can mash it with a seaweed butter and a little ginger," Briffard suggests.

Today Yamashita works with just six clients, including two of the world's most innovative chefs -- Pierre Gagnaire and Pascal Barbot -- as well as rising star Sylvain Sendra, and with the Tour d'Argent, one of Europe's oldest restaurants.

He recently struck two Paris luxury hotels off his customer list after their chefs failed to live up to his exacting standards.

One was "never in his kitchen, there was no exchange" with him, he said, while the other was simply cooking kabu dice in orange juice -- "pointless" in the Japanese farmer's view.

"I want to work with chefs who work hard with my vegetables, to find the very best recipes," he explained.

And he can afford to be picky. "The quality is such that he can choose who and when to deliver, and at what price," said Briffard, even at rates three to four times higher than typical Paris area farmers.

"This is what absolute rarity is about. You will only find Yamashita's turnip in six restaurants in the world. White truffles, by comparison, are easy to come by," said chef William Ledeuil, another member of the select Yamashita club.