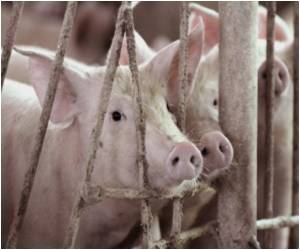 Scientists have genetically modified a Yorkshire pig, which will be the first of a new generation of 'Frankenswine' hogs that are designed to be cheaper and greener.

It tastes no different than the ordinary pig, but the GM superpig, nicknamed the Enviropig, contains less phosphorus in its manure and so poses less risk to rivers, streams and lakes.

However, GM critics have slammed the move, saying that the animals are 'anything but environmentally friendly' - and could lead to more intensive pig farms.


Pigs are fed phosphorus to help form strong bones, teeth and cell walls. Most farmers have to feed pigs an enzyme called phytase to make plant phosphorus digestible. But phytase supplements are not very good at breaking down phosphorus, so a large amount is flushed out of their bodies in waste.

Pigs that are genetically modified to suffer from incurable human diseases have been created by Scottish scientists so they can be used by drug companies
Advertisement
To take care of this, researchers took a gene responsible for the creation of phytase from E.coli bacteria and added it to the genetic make-up of a Yorkshire pig.

They combined it with a gene taken from a mouse before inserting it into the Enviropig's DNA.

"They are pretty friendly and pretty gregarious. These pigs are almost identical to a normal Yorkshire pig. They look normal, they grow normally and they behave normally," the Daily Mail quoted Professor Rich Moccia, of the University of Guelph, in Ontario, Canada, as telling the BBC.

Vicky Hird, of Friends of the Earth, said the name Enviropig 'was a huge irony'.

"Pigs reared in these intensive units can never be sustainable because they require so much soya which is grown by clearing forests which leads to more greenhouse gases being released," she said.

"And when it comes to GM food, consumers are voting with their feet. They won't accept it."

A novel sperm stem-cell technique has been used by researchers at UT Southwestern Medical Center to produce genetically modified rats.
Advertisement
<< Why Your Intuition can Be Right, And Wrong
Why Some Cancers Become Malignant? >>

Drug Interaction Checker Diaphragmatic Hernia Calculate Ideal Weight for Infants Blood Pressure Calculator Find a Doctor The Essence of Yoga Pregnancy Confirmation Calculator Sanatogen Hearing Loss Calculator Iron Intake Calculator
This site uses cookies to deliver our services.By using our site, you acknowledge that you have read and understand our Cookie Policy, Privacy Policy, and our Terms of Use  Ok, Got it. Close
×