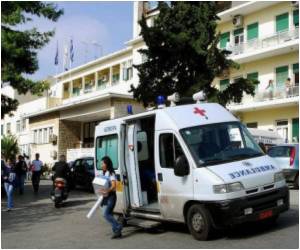 After a mother lost her baby in giving birth in a car on her way to hospital because the clinic closer to her home was closed, French President Francois Hollande demanded an inquiry.

"No French person should be more than 30 minutes from emergency care," Hollande said, adding that "medical deserts" in rural areas were unacceptable.

Burn-out seems to be a common ailment among emergency care doctors, as one in two suffer from it reports a survey of French physicians, published online in Emergency Medicine Journal .
Advertisement

The baby's death occurred Friday in southwestern France's Lot region as the mother and her partner were trying to get to a hospital more than an hour from their home near the town of Figeac.


They were forced to stop on a motorway as the birth began and the child died soon afterwards.

The local maternity clinic at Figeac had been closed in 2009 despite warnings from doctors and hospital staff as part of a policy to concentrate care in more modern establishments, often in or on the edge of major cities.

A recent study says that many cases of adverse drug reactions (ADRs) seen among hospital and emergency care patients are preventable.
Advertisement
A national lobby group supporting neighbourhood hospitals called Saturday for a moratorium on the closure of maternity units.

Its president, Michel Antony, said that two-thirds of such units across France had been closed in the past 20 years.

"We are faced with the dominant ideology that concentrating is the solution, which is wrong," he told AFP.

"If another maternity clinic had been kept in the Lot, yesterday's drama would not have happened."

The Essence of Yoga Noscaphene (Noscapine) Nutam (400mg) (Piracetam) A-Z Drug Brands in India Drug - Food Interactions Post-Nasal Drip Drug Side Effects Calculator Blood - Sugar Chart Calculate Ideal Weight for Infants Find a Hospital
This site uses cookies to deliver our services. By using our site, you acknowledge that you have read and understand our Cookie Policy, Privacy Policy, and our Terms of Use