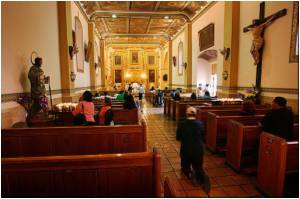 The Russian embassy said that French authorities have given permission for a new Russian Orthodox church to be built near the Eiffel Tower, a project that has been blocked since 2010.

The plan for the church dates back to 2007 when Alexy II, the now deceased patriarch of Moscow, visited France and said the Russian Orthodox church wanted a bigger edifice in Paris.

Russia acquired a prime parcel of land in 2010 near the Eiffel Tower after the French state-run meteorological office sold its headquarters on the Left Bank.


But plans for a church topped with five golden domes enveloped in a canopy resembling a veil ran into opposition from the city's Socialist mayor Betrand Delanoe who called the design "mediocre architecture conceived in haste."
Advertisement
But a new plan has got the go-ahead, a Russian diplomat in Paris said.

"We have received confirmation of the permission to build the church," a Russian diplomat in Paris said without specifying when work would start.

An official from the prefecture of the Ile de France region, which includes Paris, confirmed this, saying the "permission is being granted."

Russia is now working on a new plan for the church which is expected to be ready in January. It will incorporate new technology and the materials will include titanium and carbon, the Russian ambassador said.

Paris is home to several Russian Orthodox churches but only one, the Trois-Saints-Docteurs church, is under the control of Moscow Patriarchate.

Source: AFP
Advertisement
<< Study Shows Why Girls are Preferred Over Boys by IVF Parent...
The Potential of Large-Scale Genetic Studies for Drug Disco... >>

Here are Some of the World's Most Spectacular Churches
The evolving architectural science means that there are many modern churches today that is going to ...