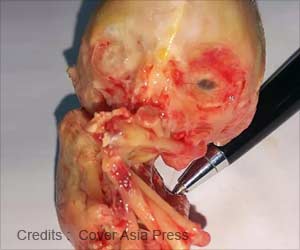 A 52-year-old woman from Nagpur, Maharashtra, in northern India, was found to have carried a calcified fetus in her abdomen for the past 15 years.

She had terminated her pregnancy 15 years ago, and her family was against her having another child. Back then, her obstetrician and gynecologist have confirmed that they have successfully aborted the baby.

Advertisement
‘The 'stone baby' condition is extremely rare and till date, there are only about 300 cases that have been recorded in the past 400 years.’

Over the years, she had been suffering from abdominal pain and had visited various doctors. But they had only given her just painkillers and pills for acidity.


From the last three years, it had only become worse as she had been vomiting continually.

She then visited a specialist at Junankar Surgical Nursing Home who discovered a 'fully grown stone baby.' The stone baby was removed by the specialist in a two-hour operation on November 23.
Advertisement
The woman went through a CAT scan, and the specialists found an obstruction in her intestines, which was blocking her digestive system.

Dr. Nilesh Junankar found that the report was unusual and performed a laparoscopy surgery, which did not go well. Later, he performed an open surgery.

"It came as a surprise to all present in the operation theatre as a fully developed baby fetus was stuck to the intestine, and her other parts were not affected," quoted Dr. Junankar.

This 'stone baby' condition is scarce. Worldwide, only 300 cases have been reported in the past 400 years.

Junankar said that since sonography was not done, the doctors did not think the baby was still there.

"The patient had stopped menstruating five years back and out of childbearing age. She was lucky to have survived like this," he mentioned.

She later thanked the hospital for relieving her from a decade of pain.

Zika Vaccine to Protect Fetuses and Testicular Infections
Zika Vaccine to protect fetuses against infection with just a single dose is a possibility. New ......

Sleep Position During Pregnancy can be Fatal for the Fetus
Pregnant mothers are instructed not to sleep on their backs and now there is evidence to prove that ...

Mother-fetus Communication
The pH of uterine fluid helps create a conducive environment for sperm migration and after ......