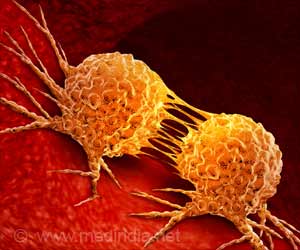 The study led by Dr. René Bernards of the Netherlands Cancer Institute (NKI), in collaboration with researchers Alberto Villanueva and Ernest Nadal of the Bellvitge Biomedical Research Institute (IDIBELL) and the Catalan Institute of Oncology (ICO), and Agustí Vidal of the Bellvitge University Hospital (HUB), has developed a new therapeutic approach.

This combination seeks to inhibit simultaneously the action of several proteins of the same signaling pathway essential for the tumor cell.


‘Combination of several drugs that act on different components of a communication pathway of tumor cells in low doses, entails a longer-term efficacy of antitumor treatments.’
Read More..


Specifically, in this study published in the Nature Communications journal, they show that at least 20% of the effective dose of the drugs is sufficient to completely block the signaling pathway and cell proliferation when we use a combination of four inhibitors.

In vitro studies with cell lines, as well as animal models generated by patient biopsies implantation into mouse lungs, showed a long-lasting response to MLD therapy with no toxic effects associated.

Although each drug in low doses had no effect independently, the combination of the four drugs became a synergistic effect that was able to stop tumor growth.

The results of this study show that the combination of several drugs that act on different components of a necessary communication pathway of tumor cells, and also, do it in low doses, entails a longer-term efficacy of antitumor treatments, and avoids the appearance of resistance.

Although now it has only been tested in one type of lung tumor, the researchers believe that this new approach could be extensible to other types of tumors. Clinical trials are planned to verify the efficacy of this strategy in patients with NSCLC tumors with EGFR mutation.