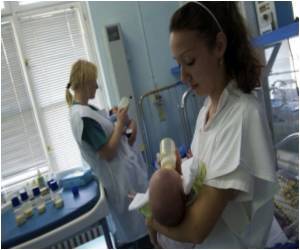 Breast milk is certainly better than the formula variety for all babies. Certainly much more so for extremely premature babies, it turns out.

If only fed on human donor milk, they are less likely to develop the dangerous intestinal condition necrotizing enterocolitis
(NEC), according to research by investigators at the Johns Hopkins Children's Center and elsewhere.

Useful information about care of the newborn following labor and delivery.
Advertisement

Only one of the 29 infants who received human milk developed NEC and it recovered without surgery, compared with five out of the 24 babies on infant formula derived from cow's milk - four of the five required surgery. The findings, the researchers said, justify a move toward a "human milk only" diet in extremely premature babies  those born weighing less than 1,500 grams, or 3.3 pounds.


"The stark differences in the risk of NEC, its complications and the need for surgery between babies who receive human donor milk and those who get formula signal the need for a change in feeding practices across neonatal intensive care units," said lead investigator Elizabeth Cristofalo, M.D., a neonatologist at the Johns Hopkins Children's Center.

Pregnancy is a time when a female blossoms into a woman with an experience never felt before. Here are a few self-care tips for pregnant mothers that will help them during their pregnancy.
Advertisement
Moreover, babies who got human milk tolerated feeding better, allowing them to be taken off supplemental IV nutrition much sooner  after 27 days on average  than the group who received cow's milk formula. Those babies spent an average of 36 days on IV nutrition, largely because their intestinal tracts were not adapting to food as well, the researchers say. IV nutrition, used temporarily in all premature babies to supplement feeding, carries risks, the most serious of which is liver damage.

"Although we didn't look specifically at liver function, we know from experience and from previous research that prolonged IV nutrition can harm a premature baby's liver," Cristofalo said.
"Using human milk cuts that risk by allowing us to wean babies off IV nutrition sooner."

The health advantages of mother's milk have been well-established, but some concerns about donor milk have lingered, including how it compares to mother's milk and whether it is, indeed, superior to cow milk formula. The new findings should resolve any residual doubts about the risks and clarify the benefits of human donor milk, the investigators said.

The multi-center study is the first trial of its kind to compare the risk for NEC and NEC surgery between premature infants fed human donor milk and those fed preterm baby formula. An earlier study by the same team showed that babies who get their own mother's milk fortified with the standard cow milk protein are more prone to NEC than babies given a combination of their mothers'milk fortified with human donor milk.

Necrotizing enterocolitis is marked by tissue damage to the baby's bowel. Because up to 40 percent of babies who develop NEC die, the condition is considered an emergency. Some cases of NEC can be treated with antibiotics and by temporarily withholding of food, but some babies require surgery to remove the dead portions of the intestines. The remaining intestine, however, can develop scarring that leads to poor absorption of nutrients, growth problems and the need for more surgery down the road.

Why Do We Eat - Nutrition Facts
News Archive
News Resource
News Category
Can BCG Vaccine Prevent Tuberculosis in Young Children? How Does Disordered Eating Develop in Kids? Go Green: Living Near Green Spaces can Boost Your Child's Lung Health How Maternal Antibodies can Protect Babies from Cytomegalovirus? How to Determine Whether Culture Influences Children or Not?
More News
Sign up for Wellness Consult a Doctor Sign up for Selfcare

More News on:
Pasteurization of milk Types of Milk Why Do We Eat - Nutrition Facts Diet Lifestyle and Heart Disease Patent Ductus Arteriosus Types of Food Allergies The Acid-Alkaline balance, Diet and Health Acid Base Dietary Balance and its Influence on Our Health and Wellbeing Lactose Intolerance Surprising Benefits of Dairy