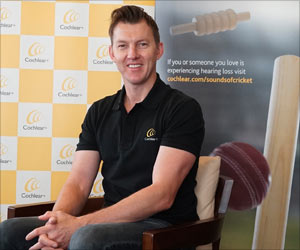 Advertisement
‘In India, 63 million people suffer from significant auditory loss. Four in every 1000 children suffer from severe to profound hearing loss and over 100,000 children are born with hearing impairments annually.’

However, "nearly 60 per cent of these could have been prevented from an early age if the right measures were taken early", Lee told IANS over telephone from Australia.


"Early intervention is the most important thing for a kid to have back normal hearing.

"There is an urgent need of making the 'new-born screen test' for hearing mandatory as well as for educating parents of children with hearing loss so that they make the best intervention at the earliest," said Lee, who began spearheading the cause of hearing loss three years ago, in wake of an accident that temporarily impaired his son's hearing.
Advertisement
The former pacer is also the Global Hearing Ambassador with global implantable hearing aid firm Cochlear According to a 2016 study published in the Indian Journal of Otolaryngology and Head & Neck Surgery, 63 million people (6.3 per cent) suffer from significant auditory loss in India. Four in every 1,000 children suffer from severe to profound hearing loss. With over 100,000 babies that are born with hearing deficiency every year, the estimated prevalence of adult-onset deafness in India was found to be 7.6 per cent and childhood-onset deafness to be 2 per cent.

This is because "in India a lot of people wait till the child is five or 10 before they take him/her to an ENT specialist. Parents don't understand the consequences of suffering hearing loss in the long term, if they don't intervene in the first or in the second year," Lee said. Weighing in on Lee's suggestions, Ameet Kishore, a Senior Consultant Surgeon, (ENT - Neurotology & Cochlear Implants) at Indraprastha Apollo Hospital, New Delhi, told IANS that "while new-born hearing screening is certainly recommended, it is not yet mandatory".

"It is being carried out across various parts of the country at the behest of various professionals, professional groups, local government bodies and other organisations, but it is yet to become a universal phenomenon," he added.

Lee, citing the example of Kerala, the first and only Indian state to have all government hospitals implement the practice, said every state, each hospital should work towards "preventing hearing loss and making sure that every child has the distinct life that you and I have got".

"I want to see in India that every single baby that's born has a new-born screen test for hearing loss," said Lee, whose son Preston Charles was five when he fell from the roof of their home in Sydney in 2011, causing him to lose his hearing in the right ear.

"I was playing in the IPL and my son had a fall back in Australia. He landed on his head and suffered a major blow on the right side of his head, his right ear and then his active hearing was impacted. For round about 8-12 months there was partial hearing loss in his right ear," Lee said.

While Charles got his hearing back after nearly a year, the incident made Lee think about parents with kids suffering from hearing loss.

However, in India "about 50 per cent to 60 per cent of hearing loss in babies occurs due to genetic causes, while 25 per cent of cases are the result of environmental factors such as maternal infections during pregnancy, complications during/after birth or accidents that involve injury to the head/neck," Hetal Marfatia Patel, Cochlear Implant Surgeon, KEM Hospital, Mumbai, told IANS.

"Early identification can be achieved through new-born hearing screening.

If parents suspect the possibility of a hearing loss in their child, or if there is a delay in the child's speech and language development, they should seek early consultation with the team of ENT doctor and audiologist -- a speech and language pathologist, " said Kishore.

Permanent hearing losses can easily be managed either with hearing aids (for mild to severe loss) or through cochlear implantation (for severe to profound loss).

"Hearing aids can be fitted in children as young as four weeks of age. Many people who do not show improvement or benefit from hearing aids can greatly benefit from cochlear implants -- a surgically implanted electronic device that restores hearing in those with profound or severe hearing loss," Patel said.

Parents should also be careful to avoid any activities that might cause head injuries in children, especially at an early age.

"Reducing exposure to loud noises and playing music at lower volumes, especially when using headphones or earphones. There are also certain ototoxic drugs (drugs that cause hearing loss) that should be avoided." Patel said.

Hearing Loss Symptom Evaluation
Hearing loss is a common problem that could occur in childhood or often develops with age or is ......

Hearing Loss Calculator
Hearing loss calculator is a quick online screening test to check for hearing loss. Result from the ...

Audiometry
Audiometry or the hearing test helps to determine the ability of a person to hear various sounds and...