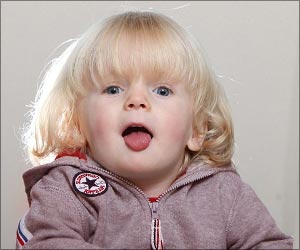 23-month-old boy, Geezer Buxton, suffers from a rare genetic condition called Prader-Willi syndrome. This means he is always hungry and is unable to know when he has eaten enough.

Victims of this syndrome have a ravenous appetite with no feelings of satiety. Victims also portray slow emotional development and experience learning difficulties as well.

The parents are afraid that their son could overeat himself to death.


Victims of this disorder eat compulsively. Symptoms of this disorder usually begin to show up at the age of six. The condition affects one in every 15,000 children born in England every year.
Advertisement
'If you saw him today, you would think he was a normal toddler, although he can't speak properly or stand due to his low muscle tone. When he was born I had to have a C-section, he was taken into intensive care and wouldn't feed properly for ten days. He was fed through a tube before we were allowed to take him home. Around three weeks later we were given the diagnosis of PWS.' Children with the condition are known to eat three to six times more than other children and keep asking for more. Though the condition by itself is not life-threatening, it can cause children to develop obesity related conditions such as type 2 diabetes and heart failure.

"If he does begin to eat everything and anything, we will have to watch him like a hawk to control his weight, as it can be a very dangerous condition to have. It is a scary thought of him being on his own because he could one day eat so much that his stomach ruptures. He could eat himself to death."

Source: Medindia
Advertisement
<< Astronauts, Space Radiation, Cancer And a Possible Cure
Did You Color Your Hair Recently? Here are Some Tips to Man... >>

Now, Toddlers Start Using Tablets!
Around 38 percent of toddlers and infants under the age of two have used a mobile device such as a ....