For Down Syndrome Patients, Varying Test Results can Make It Harder to Get the Right Vision

Even objective, automated vision testing--using a device called an autorefractor--gives variable results in patients with Down syndrome, shows a study in the May issue of Optometry and Vision Science, the official journal of the American Academy of Optometry.

The journal is published by Wolters Kluwer.


Variation in the results of autorefractor testing is nearly three times greater in people with Down syndrome than in a group of comparison patients, according to the new research by Jason D. Marsack, PhD, FAAO, and colleagues of University of Houston College of Optometry. That variability raises concern that some people with Down syndrome might not receive the best possible prescription to correct their vision.


‘On average, variation was nearly three times greater in people with Down syndrome, compared to the control group.’


Increased Variability in Autorefractor Testing in People with Down Syndrome.

The researchers performed three automated measurements of refractive error in 139 patients with Down syndrome and in a matched control group. Subjects in both groups ranged from children to middle-aged adults. Nearly all people with Down syndrome have vision (refractive) abnormalities requiring prescription glasses to see clearly.

Autorefraction testing is commonly used for patients who have difficulty participating in subjective vision testing--those who may be unable to tell the eye doctor whether "number one or number two" gives them a clearer image. While the autorefractor is highly accurate for simple vision prescriptions, it is less so in patients with more complex optical aberrations--which many people with Down syndrome have.

As expected, the study found that people with Down syndrome had greater refractive abnormalities. The Down syndrome group had a particularly high rate of hyperopia (far-sightedness) along with increased astigmatism (blurred vision due to irregular shape of the eye).

Although the study could not determine the reasons for increased variability in people with Down syndrome, it was likely due to two factors: greater difficulty participating in the autorefractor testing procedure and more complex, "higher-powered" optical aberrations of the eye. Ninety-one percent of subjects with Down syndrome had at least one successful autorefractor test, compared to 99 percent of the control group.

In about eight percent of the Down syndrome group, the autorefractor results varied by more than 1.5 diopters--which would have a large effect on the vision prescription. Dr. Marsack and colleagues note that this level of variability, added to the other challenges of subjective vision testing, would reduce the chances of reaching the best possible refraction for a "sizeable portion" of people with Down syndrome.

To minimize variability and provide the best possible vision prescription for patients with Down syndrome, Dr. Marsack and colleagues suggest using multiple methods to measure the vision abnormality--including both objective and subjective methods--and corroborating the results across techniques. For the future, they highlight the need for "additional tools to provide objective measurements of refraction with greater certainty." 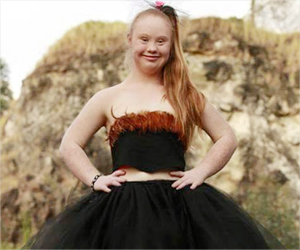 Eighty-meter-long Pastry Made to Raise Funds for Down Syndrome
The giant meat pastry was made with over 350 kg of dough, 120 kg of cheese and 30kg of ham, taking four hours to cook divided in 4000 cooking units.
READ MORE

Stem Cell Treatment can Lead to Some Improvement in Babies With Down Syndrome
A three-year-old baby, born with Down Syndrome, had complaints of delayed milestones, lack of voice, cardiac defects, slanted eyes and no neck holding capacity.
READ MORE

Medical Care of Kid With Down Syndrome Not a Financial Burden for Families
Study finds average monthly out-of-pocket medical costs to families are around $80 more than care of a typically developing child.
READ MORE

Young Couple With Down Syndrome Fight For Parenting Dream
Michael Cox and Taylor Anderton from Queensland met six years ago through competitive swimming and got engaged.
READ MORE