Food of the Future: Bug Mac? 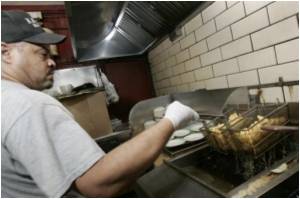 Insects have slowly become a delicacy in the Far East and experts are predicting that it will not be too long before the West follows suit.

Dutch student Walinka van Tol inspects the worm protruding from a half-eaten chocolate praline she's holding, steels herself with a shrug, then pops it into her mouth.

"Tasty ... kind of nutty!" the 20-year-old assures her companions clutching an array of creepy crawly pastries at a seminar, which forecast that larvae and locusts will invade Western menus as the price of steak and chops skyrocket.


Van Tol and about 200 other tasters were guinea pigs for a group of Dutch scientists doing groundbreaking research into insects replacing animal meat as a healthier, more environmentally friendly source of protein.

Encyclopedia section of medindia gives an introduction to some super foods that help in preventing and controlling cancer
Advertisement
"There will come a day when a Big Mac costs 120 euros ($163) and a Bug Mac 12 euros, when more people will eat insects than other meat," head researcher Arnold van Huis told a disbelieving audience at Wageningen University in the central Netherlands.

"The best way to start is to try it once," the entomologist insisted.

At break time, there is a sprint for the snack tables with a spread of Thai marinated grasshopper spring rolls, buffalo worm chocolate gnache, and a seemingly innocent pastry "just like a quiche lorraine, but with meal worms instead of bacon or ham", according to chef Henk van Gurp.

The snacks disappear quickly to the delight of the chef and organisers. But the university's head of entomology Marcel Dicke knows that changing Westerners' mindset will take more than disguising a worm in chocolate.

"The problem is here," he tells AFP, pointing at his head while examining an exhibition featuring a handful of the world's more than 1,200 edible insect species including worms, gnats, wasps, termites and beetles.

Three species: meal worms, buffalo worms and grasshoppers, are cultivated by three farmers in the Netherlands for a small but growing group of adventurous foodies.

"People think it is something dirty. It generates a Fear Factor response," citing the reality series that tests competitors' toughness by feeding them live insects.

Dicke said Westerners had no choice but to shed their bug bias, with the UN's Food and Agriculture Organisation predicting there will be nine billion people on the planet by 2050 and agricultural land already under pressure.

"We have to eat less meat or find an alternative," said Dicke, who claims to sit down to a family meal of insects on a regular basis.

Bugs are high in protein, low in fat and efficient to cultivate -- 10 kilograms (22 pounds) of feed yields six to eight kilograms of insect meat compared to one kilogram of beef, states the university's research.

Insects are abundant, produce less greenhouse gas and manure, and do not transfer any diseases, when eaten, that can mutate into a dangerous human form, say the researchers.

"The question really should be: 'Why do we NOT eat insects?," said Dicke, citing research that the average person unwittingly eats about 500 grams of bug particles a year anyway -- in strawberry jam, bread and other processed foods.

According to Van Huis, about 500 types of insects are eaten in Mexico, 250 in Africa and 180 in China and other parts of Asia -- mostly they are a delicacy.

One avid European convert is Marian Peters, secretary of the Dutch insect breeders association, Venik, who likes to snack on grasshoppers and refers to them as "the caviar of insects".

On a visit to an insect farm in Deurne in the south east Netherlands, she greedily peels the wings and legs off a freeze dried locust and crunches down with gusto.

"They are delicious stir fried with good oil, garlic and red pepper and served in a taco," said Peters.

The owner of the farm, Roland van de Ven, produces 1,200kg of meal worms a week of which "one or two percent" for human consumption, the rest as animal feed.

"When you see an insect, it is a barrier. I think people will come around if the insects are processed and not visible in food," he explains while running his fingers through a plastic tray teeming with worms -- one of hundreds stacked ceiling-high in refrigerated breeding rooms.

"It is harder to eat a pig you have seen on a spit than a store-bought steak. This is similar."

The farmer said human demand for his "mini-livestock" was growing slowly -- from 300 kilograms in 2008 to 900 kilograms last year.

For those who won't be swayed, there is hope for less grizzly alternative. Wageningen University is leading research into the viability of extracting insect protein for use in food products.

"We want to determine if we can texturise it to resemble meat, like they do with soy," said Peters, clutching a bag of pinkish powder -- protein taken from meal worms she hopes will one day be a common pizza ingredient.

Researchers worldwide have discovered that eating fish regularly is good for health. Regular consumption of fish may reduce the risk of diseases such as asthma, prostate cancer and eyesight.
Advertisement
Advertisement