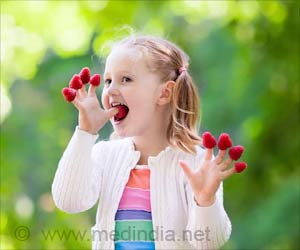 Frosted cupcakes, sprinkled donuts and chocolate chip cookies -- all on the list of foods that pediatrician Megan Pesch suddenly found difficult to avoid.

It is important to teach kids what is healthy eating and how to eat healthy. Healthy eating tips for kids must include creative recipes and presentations.
Advertisement
‘While girls' clothing mostly brandished pastries and desserts, boys' clothes were more likely to include fast food and salty categories like pizza, hot and fries.’

Not at the bakery or grocery store, but on children's clothing.


The mother of three daughters couldn't help but notice that food graphics had become fashionable -- from sleep sacks and pajamas adorned with pink and purple donut patterns to T-shirts decorated with ice cream cones and cutesy sayings about being "sweet."

Making healthy food easier to access in hospital canteens and food outlets, as well as increasing healthy options and reducing portion sizes, are the most effective ways of encouraging healthcare staff to improve their diets.
Advertisement
Pesch, M.D. a developmental behavioral pediatrician who studies childhood eating behaviors at University of Michigan C.S. Mott Children's Hospital, wondered how prominent the trend was and whether it had implications for children's eating habits.

"I started thinking about how food graphics on clothing may impact kids' identification with food starting as early as when they're babies," Pesch says. "Could food on apparel be another influence on food preference and eating behaviors?"

"Turning our kids into walking billboards of junk food reinforces the appeal of these foods," she says. "Whether intentional or not, we are sending positive societal messages about consuming unhealthy food to children and their parents that may influence unhealthy eating behaviors long term."

In a new analysis published in journal Eating Behaviors, Pesch and colleagues looked at 3,870 clothing items over a month-long period in 2018 from four major children's retailers. One in 11 apparel items included food graphics and two-thirds of those foods were unhealthy while others had healthier options, such as fruit. A third of the items featured food graphics "having fun," such as a pizza slice riding a skateboard.

Gender differences were blatant. "That may underlie some of these cultural expectations of girls' characteristics versus boys' behavior, specifically that girls are expected to be 'sweet,'" Pesch says.

Other studies have suggested that children's food preferences and eating behaviors are associated with social influences. Children are more likely to taste or eat a food paired with an image of a character, for example. Indeed, mascots and cartoon characters have often been used in food marketing to increase a brand's appeal to children.

There has been less attention to non-brand specific graphic items such as clothing with food icons, Pesch says.

But many food graphics included in the analysis were portrayed as characters. Examples include a dinosaur with a thought bubble thinking about a hamburger, a sequined ice cream cone carrying a purse and soda and fries high-fiving with the word "besties." Or the shirts that featured unicorns, rainbows and a cupcake with the phrase "Dream Big" and a chocolate chip cookie dancing with a glass of milk.

Sayings such as "More Donuts, More Pizza, More Vacays," "Donut Worry Be Happy" and "Always S'More Fun with You" are other examples.

Clothing is believed to be a powerful medium that may influence children's self-identity and graphics portraying unhealthy food as "fun, silly and positive" doesn't seem to be going away, Pesch notes. Donuts, pizza and other junk food items are also showing up more on other kids' items, such as inflatables, toys and gift wrap.

Research suggests that food preferences and eating behaviors established in childhood often persist into adulthood, authors say. It is unknown what messages children may internalize when wearing food-graphic clothing, and if this influences children's food preferences but it should be explored in future research, they say.

"There is nothing wrong with a donut or cookie once in a while. They are 'sometimes foods' and completely fine in moderation," Pesch says.

"But children's association and relationship with food begins developing at a young age. Obesity is much more easily prevented than it is treated."

"We spend a lot of time studying how children develop eating habits and food preferences and what we can possibly do early on to prevent obesity," she says. "Food graphics on children's products may provide insights into how society shapes children's emotional relationships with food and reinforces obesity-promoting messaging."

Food addiction is a growing threat among teenagers. Find out how to combat the problem with preventive tips and strategies for overcoming food addiction.
Advertisement
<< Home-based Exercise Lowers Subsequent Falls in High-risk Sen...
Epilepsy Drugs During Pregnancy Linked to Childhood Behavior... >>

Food addiction is the compulsive need to eat junk food that has a lot of carbohydrates, sugar, flour and other fatty substances. This can occur even when you are not hungry.