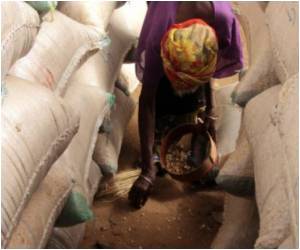 In Chad, the situation already is so bad that some villagers are digging into ant hills to collect grain the insects have stored.


"All signs point to a drought becoming a catastrophe if nothing is done soon," said Mamadou Biteye, Oxfam's regional director for west Africa. "A concerted aid effort is needed to stop tens of thousands dying due to international complacency."

A Penn State biologist has said that researchers need to use all available resources in an integrated approach to put agriculture on a path to solve the world's food problems while reducing pollution.
Advertisement
In the countries most affected, malnutrition rates are at between 10-15 percent and more than one million children are at risk of severe acute malnutrition.

The group said that in northern Mali, clashes between the army and Tuareg rebels have forced tens of thousands of people to flee their homes, adding extra pressure for resources in surrounding countries.

Oxfam wants to raise $37 million (28 million euros) to provide food and support to about one million people.

A new, state-funded farming community has given new life to Gaetan Charlly Lengou, but he knows he will have to deliver results in the project, designed to tackle Congo's food crisis.
Advertisement
<< 64 Percent Health Insurance, General and Life Insurance Emp...
Bias in Decision-making Linked to Depression >>

African-Americans More Prone to Suffer Keloid Scarring of the Head