Following Retirement Benedict XVI to be Known as 'Pope Emeritus' 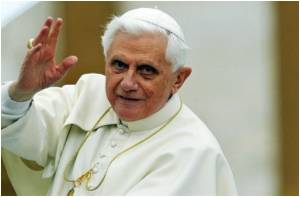 Pope Benedict XVI will be known as 'pope emeritus' and will retain the honorific 'His Holiness' after he steps down said Vatican officials.

He will also continue to be known by his papal title of Benedict XVI, rather than reverting to Joseph Ratzinger.

The Pope will wear his distinctive white cassock without any cape or trimmings.


According to the BBC, he will surrender his gold ring of office, known as the fisherman's ring, and his personal seal will be destroyed in the same way as when a pope dies.
Advertisement
Vatican spokesman Federico Lombardi said that Benedict XVI would also give up wearing his specially-made red leather loafers, instead wearing brown shoes hand made for him by a Mexican craftsman during a brief visit to Mexico last year.

According to the report, the title "emeritus" is used when a person of status, such as a professor or bishop, hands over their position so their former rank can be retained in their title.