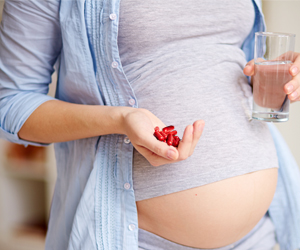 Folic acid or vitamin B9, which is known to prevent various neural tube defects, could overcome the side effect of dolutegravir that is used to treat HIV, according to the team of researchers at Baylor College of Medicine.

The body transforms dietary folic acid into folate, which mediates normal neural tube development. The researchers discovered that the drug interferes with the binding of folate to its receptor, thus promoting neural tube defects.

Vital info about vitamin B9, its molecular structure, dietary sources, beneficial aspects, symptoms of deficiency and toxicity, supplementation tips and related research news are discussed in detail
Advertisement
‘Adequate intake of foods fortified with folic acid could be one of the best solution to prevent neural tube defects among babies whose mothers were using HIV therapies containing dolutegravir.’
Read More..
Tweet it Now


Importantly, folic acid supplementation can mitigate the risk of the medication in an animal model, suggesting that having folic acid-fortified foods available to the population at risk would significantly reduce the chance of dolutegravir triggering this type of neurodevelopmental problems. The study appears in the journal AIDS.


"Neural tube defects occur when the development of the neural tube, the embryonic central nervous system that gives rise to the brain and spinal cord, is disrupted during early stages of embryonic development. In humans, this refers to gestational days 17 to 30," said first and corresponding author Dr. Robert Cabrera, associate professor in the Center for Precision Environmental Health and the Department of Molecular and Cellular Biology at Baylor College of Medicine.
Advertisement
Thanks to a number of clinical research studies conducted during the past 50 years, researchers know that dietary folic acid has a protective effect against the vast majority of neural tube defects. This finding led to the implementation of mandatory folic acid fortification of grains and cereal products in 87 countries, including the U.S. since 1999, and consequently to the prevention of the vast majority of neural tube defect cases in these countries.

The body requires folic acid to conduct a number of cellular processes, including the synthesis of the building blocks of DNA, which is essential for proliferating cells. Lacking enough folic acid inhibits DNA synthesis and cell proliferation and can have serious consequences, especially in the growing embryo, which is engaged in active cell proliferation. Folic acid deficiency in the embryo, together with genetic and environmental factors, can result in failed closure of the neural tube and lead to defects.

"My colleagues and I have experience studying folate and its interaction with its receptor, which mediates folate effects, so we decided to investigate whether the association between dolutegravir and higher risk of neural tube defects involved folate receptor interactions with folate," Cabrera said.

Previous evidence has indicated that interfering with the folate receptor can lead to neural tube defects. Studies in laboratory animals have shown that this disruption can result in developmental defects in the offspring. In addition, Cabrera and his colleagues had previously found that the levels of antibodies to folate receptor are higher in serum of mothers with babies with neural tube defects.

Using a variety of laboratory techniques, the researchers discovered in this study that at therapeutic concentrations the drug does disrupt the binding of folate to its receptor. This disruption involves at least four players: folate, folate receptor, dolutegravir and calcium ions. It is known that calcium increases folate binding to its receptor and that doluteglavir has affinity for positively charged ions such as calcium. The researchers propose that dolutegravir alters folate receptor binding by interacting with calcium, and the resultant complex is less soluble and less available to carry its biological functions.

Furthermore, working with the zebrafish animal model, Cabrera and his colleagues also discovered that exposing embryos to dolutegravir starting one to three hours after fertilization completely disrupted embryo development; but, importantly, this toxicity was mitigated by simultaneously providing folate to the embryos. Interestingly, exposing embryos to the drug five to eight hours after fertilization did not alter their development, indicating that early development is the critical period in which embryos are most susceptible to doluteglavir toxicity.

In populations that have folic acid-fortified foods available, women of childbearing age have a reduced risk of having babies with neural tube defects. For instance, the Centers for Disease Control and Prevention report that in the U.S. less than 1 percent of the population is deficient in folic acid. But in other countries such as Botswana that do not have this type of fortified foods, up to 40 percent of the people can be deficient in folate, Cabrera explained.

"In Botswana, up to one-third of the women are HIV-positive and this medication is being used mainly by women of childbearing age. Considering that these same women probably also are deficient in folate and other vitamins and minerals and may have anemia caused by iron deficiency, the combined effect with the medication increases the chance of neural tube defects on their babies," Cabrera said. "It's like the perfect storm, but the good news is that there is an easy solution that several countries have already implemented - provide foods fortified with folic acid."

Cantaloupes (muskmelons) are available almost all the year round so dont miss out on the health benefits of ...

Low folate levels during pregnancy increase risk of the condition. It is a birth disorder and a severe form ...