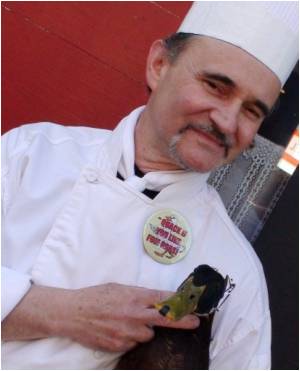 French foie gras producers are now admitting over how they may have gone too far, and have vowed to implement changes into how ducks and geese are reared.

They are also promising a new spirit of openness and transparency about the controversial practice of gavage -- the force-feeding of animals by passing plastic tubes through their throats directly into their stomachs.


"In the '80s, 30 to 35 percent of foie gras came from Eastern European countries. We had to improve production to be more competitive and maybe went too far," she said.
Advertisement
Animal-rights activists have carried out a sustained campaign against foie gras -- literally "fatty liver" in French -- for decades.

Its sale has been banned in California, Britain's House of Lords has taken it off its menu and Internet retailer Amazon has banned it from its website.

The delicacy -- a standard feature on French tables at Christmas and other festive occasions -- is fiercely defended by fans who argue that birds stuff themselves with food in the wild while undertaking long migratory voyages.

But critics insist the practice is cruel and a 1998 EU report showed that death rates among force-fed birds could be up to 20 times higher than in those reared normally.

Foie gras producers have also come under fire for keeping the ducks and geese in cages where they have no space to move or even spread their wings.

It was in the 1980s that France -- which accounts for 75 percent of global foie gras production -- widely adopted the practice of keeping birds in cage-like boxes.

Now steps are being taken to improve conditions, with the French agriculture ministry ordering producers by 2016 to introduce cages capable of housing at least three birds and big enough for them to move around and spread their wings.

CIFOG is also opening the doors of farms to show how the animals are reared and fed.

"Of course gavage is not very romantic and so we avoided talking about it. But now we are trying to explain it more and more," Pe said.

As part of its transparency drive, CIFOG recently showcased a farm in the southwestern region of Gers run by Pierre Peres and his twin brother, who force-feed nearly 9,000 ducks a year.

Considered an artisanal farm, it is far from typical industrial production.

At the Peres farm, ducks are kept in enclosed areas but are free to move around. Force-feeding is done individually, with feeders picking up the animals and placing them on their laps to insert a funnel in their throats.

At the start of the gavage period, which normally lasts 15 days, the ducks are fed 250 grammes of maize and the quantity is slowly increased to double that at the end.

There are about 1,500 such artisanal foie gras farms in France -- but they are hardly the norm.

The vast majority of producers, about 5,000, are industrial sites that are the main target of animal rights groups.

A visit to an industrial foie gras farm run by the Euralis group reveals a different world altogether from the Peres farm.

A thousand ducks are force-fed there, bundled in tight cages housing three birds each.

The cages are raised to human height to make the task of feeding easier for workers. The floor below is a stinking mess, with a flowing yellow river of droppings and duck fat.

In one cage several animals are clearly injured and bleeding. In another, one duck lies dead.

Xavier Fernandez, a researcher at the Institue of Agronomical Research in the southern city of Toulouse, admitted the images can be "shocking" but said visitors should "distance themselves emotionally" from what they see.

"Force feeding is no more shocking than any other method of animal husbandry," he said.

"The real question eventually is whether we should be rearing animals for human consumption at all?"

For most in France, there seems to be little doubt, even when it comes to foie gras.

An Opinionway poll in late November found that only 29 percent of the French refuse to buy foie gras for ethical reasons and that 55 percent want force-feeding to continue.

Source: AFP
Advertisement
<< MRSA Strain Got Help from Skin Bacteria, Rose to Prominence
Fake Wine Trial in US Summed Up >>

France Criticizes Amazon UK Ban on Foie Gras
To ban the sale of foie gras on its British website, France criticised a decision by Amazon ......

Foie Gras Ban Upheld
Following a 13 month block on the controversial delicacy, an appeal by the US federal court has ......