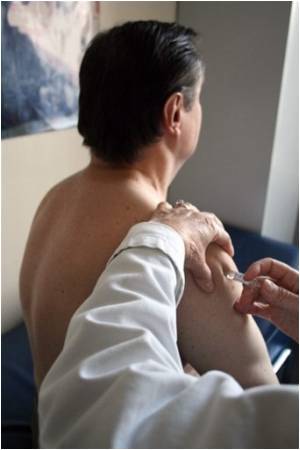 Flu vaccination is safe for kidney transplant patients and reduces their risk of organ loss and death, a new study says.

Influenza can cause severe illness and even death in some individuals. Organ transplant recipients and those taking immunosuppressant medications face a particularly high risk of dying after being infected. Protection against the flu is especially important for these patients, but earlier reports have suggested that influenza vaccination might activate an immune response that could trigger rejection of transplanted organs. Some studies have also suggested that the immunosuppressant medications that transplant recipients take may decrease the effectiveness of the influenza vaccine.

How healthy are your kidneys? Is it possible to lead healthy lives with just a single kidney? Learn more by taking part in this quiz.
Advertisement

To investigate these issues, Frank Hurst, MD (Walter Reed Army Medical Center and F. Edward Hebert School of Medicine) and his colleagues assessed Medicare claims for influenza vaccination and influenza infections in 51,730 adult Medicare patients first transplanted from January 2000 to July 2006 and were followed through October 2006. There were 9,678 (18.7%) patients who were vaccinated against the flu in the first year after transplantation. These individuals were 23% less likely to experience organ loss and 18% less likely to die during the study period than individuals who were not vaccinated. A total of 310 (0.6%) patients got the flu. They were no more likely to experience organ loss than patients who did not get the flu.


These findings do not support withholding immunization on the basis of concerns that the influenza vaccine could negatively affect transplanted organs. The authors noted, however, that no data are currently available to prove that influenza vaccination actually prevents the flu in transplant recipients.

Since the early times, the novel idea of transplanting tissues and other body parts from one organism to the other has captured the imagination of successive generations.
Advertisement
<< China Set to Impose Smoking Ban in Public Places
Role of Psychological First Aid in Wake of Deadly Storms >>