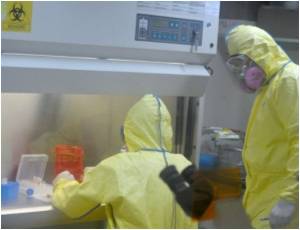 Flu virus gets transmitted even before the appearance of their symptoms, reveals study.

If applied to human, it suggests that people pass on flu to others before they know they are infected, making it very difficult to contain epidemics.

Knowing if people are infectious before they have symptoms is important to help authorities plan for an epidemic, but it has been difficult to establish this from data collected during outbreaks, the journal Public Library of Science ONE reports.


Previous research using math models estimated that most flu transmission occurs after the onset of symptoms, but some happens earlier.

The flu strain used in the study was from the 2009 swine flu pandemic, which killed almost 300,000 people worldwide. It is the first to investigate this question experimentally in an animal model. Ferrets are commonly used in flu research because they are susceptible to the same virus strains and show similar symptoms to humans.

Influenza (or rather, the flu) is a cold weather infectious condition that affects the young and old alike. Though most reported cases are mild, the flu can sometimes cause severe and life-threatening complications in both children and adults, thanks to wrong medications and improper vaccinations. Learn more about the disease from our Flu Quiz and guard yourself and your family from a poss
Advertisement
Ferrets with flu were put in contact with un-infected ferrets for short periods at different stages after infection. Transmission occurred before the first symptom.

The researchers found that ferrets were able to pass on flu to others just 24 hours after becoming infected themselves. The animals did not suffer from fever until 45 hours after infection and began sneezing after 48 hours.

Wendy Barclay, professor from the Department of Medicine at Imperial College London and study co-author, said: "This result has important implications for pandemic planning strategies. It means that the spread of flu is very difficult to control, even with self-diagnosis and measures such as temperature screens at airports.

"It also means that doctors and nurses who don't get the flu jab are putting their patients at risk because they might pass on an infection when they don't know they are infected," added Barclay, according to an Imperial College statement.

The results are consistent with earlier studies which found that sneezing is not necessary to transmit flu -- droplets of virus are expelled into the air during normal breathing.

Kim Roberts, who is now based at Trinity College Dublin and led the study said: "Ferrets are the best model available for studying flu transmission, but we have to be cautious about interpreting the results in humans."

Find out the risks for contracting swine flu and take the necessary precautionary steps. Swine flu caused a pandemic in 2009 with several deaths reported worldwide.
Advertisement
<< It's Never too Late to Take a Walk for Life
Healthcare Management System Launched by Indian Navy >>

Accident and Trauma Care Vent Forte (Theophylline) Indian Medical Journals Blood Donation - Recipients Turmeric Powder - Health Benefits, Uses & Side Effects Find a Doctor Daily Calorie Requirements A-Z Drug Brands in India Calculate Ideal Weight for Infants The Essence of Yoga
This site uses cookies to deliver our services. By using our site, you acknowledge that you have read and understand our Cookie Policy, Privacy Policy, and our Terms of Use