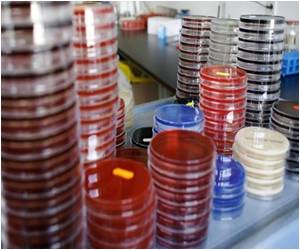 At Oregon State University, researchers have discovered that one gene in a common fungus acts as a master regulator and deleting it has opened access to a wealth of new compounds that have never before been studied - with the potential to identify new antibiotics.

The finding was announced in the journal PLOS Genetics, in research supported by the National Institutes of Health and the American Cancer Society.

Scientists succeeded in flipping a genetic switch that had silenced more than 2,000 genes in this fungus, the cereal pathogen Fusarium graminearum. Until now this had kept it from producing novel compounds that may have useful properties, particularly for use in medicine but also perhaps in agriculture, industry, or biofuel production.


"About a third of the genome of many fungi has always been silent in the laboratory," said Michael Freitag, an associate professor of biochemistry and biophysics in the OSU College of Science. "Many fungi have antibacterial properties. It was no accident that penicillin was discovered from a fungus, and the genes for these compounds are usually in the silent regions of genomes."
Advertisement
"What we haven't been able to do is turn on more of the genome of these fungi, see the full range of compounds that could be produced by expression of their genes," he said. "Our finding should open the door to the study of dozens of new compounds, and we'll probably see some biochemistry we've never seen before."

Source: Eurekalert
Advertisement
<< Scientists Find A New Treatment for Patients at High Risk o...
Must Have Gadgets Of The Season For Men >>

New Research Speculates On The Rosetta Stone for Antibiotic Resistance
A novel technique to confront the problem of antibiotic resistance is published in JoVE, the ......

Researchers Fish New Pond for Antibiotics
At McMaster University, researchers are addressing the crisis in drug resistance with a novel ......

No Evidence That Honey can Replace Antibiotics in Dialysis Infection
A new study has found no evidence that honey is an effective alternative to antibiotics in ......