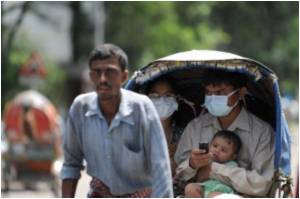 A day after swine flu claimed an elderly person, five more cases were tested positive for H1N1 virus in Lucknow.


Three of the infected people were SGPGI staffers, two of them technicians. The other two are from the city's Telibagh area.

An elderly person from the city's Gomtinagar area had died of swine flu at a private hospital Wednesday.

Find out the risks for contracting swine flu and take the necessary precautionary steps. Swine flu caused a pandemic in 2009 with several deaths reported worldwide.
Advertisement
Meanwhile, dengue too is spreading in the city with four people testing positive for the fever.

The health department has swung into action to control the spread of swine flue and dengue.

Last year too, many cases of the two diseases were reported in the city.

Is the world in the grip of its first influenza pandemic in forty years? It definitely seems so! The current swine flu or pig flu disaster traces its origin to the badly- hit State of Mexico.
Advertisement
<< Study Claims That Vivid Memories Retain Freshness Over Deca...
Experts Believe That Public Health Need a Radical Shake Up >>