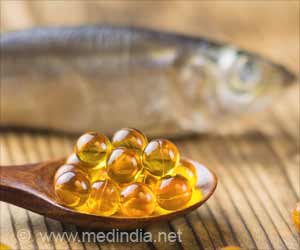 Fish oil supplements could be as good as drugs for treating Attention Deficit Hyperactivity Disorder (ADHD) in kids with omega-3 deficiency as the pills help youngsters focus, reports a new study. The findings of the study are published in the Translational Psychiatry.

Researchers from King's College London and China Medical University in Taichung, Taiwan, have found omega-3 fish oil supplements improve attention among children with Attention Deficit Hyperactivity Disorder (ADHD), but only among those with low levels of omega-3 in their blood.

The researchers say their results bring a personalized medicine approach to psychiatry by demonstrating that omega-3 only works for some children with ADHD. Previous research by the same group found that children with omega-3 deficiency are more likely to have more severe ADHD.


‘Omega 3 fish oil helped kids with ADHD to focus if they were deficient in the nutrient. But, it did not help and even had the opposite effect on kids who already had healthy or high levels of omega-3. ’
Read More..


In a randomized controlled trial, 92 children with ADHD aged 6-18 were given high doses of the omega-3 fatty acid EPA (eicosapentaenoic acid) or a placebo for 12 weeks.

The researchers caution that parents should consult with medical professionals before opting to give their children omega-3 supplements. Omega-3 deficiency can be identified by the presence of dry and scaly skin, eczema, and dry eyes, and could be confirmed through a blood test like the one conducted in this study (though currently, the blood test is only available for research purposes).

Previous studies have found inconsistent findings of omega-3 supplementation on ADHD symptoms, with overall effect sizes being relatively small. Standard treatments offered to parents whose children have ADHD include stimulants such as methylphenidate. The effect size of improvement in attention and vigilance from methylphenidate is 0.22-0.42. In comparison, the effect sizes in the trial of omega-3 supplementation for those children with low blood levels of EPA were larger, at 0.89 for focused attention and 0.83 for vigilance.

Dr. Jane Chang, the co-lead researcher from the Institute of Psychiatry, Psychology & Neuroscience at King's, said: 'Our results suggest that fish oil supplements are at least as effective for attention as conventional pharmacological treatments among those children with ADHD who have an omega-3 deficiency. On the other hand, it is possible to have too much of a good thing, and parents should always consult with their children's psychiatrists since our study suggests there could be negative effects for some children.'

Professor Carmine Pariante, the senior researcher from the Institute of Psychiatry, Psychology & Neuroscience at King's, said: 'The omega-3 supplements only worked in children that had lower levels of EPA in their blood as if the intervention was replenishing a lack of this important nutrient. For those children with omega-3 deficiency, fish oil supplements could be a preferable option to standard stimulant treatments. Our study sets an important precedent for other nutritional interventions, and we can start bringing the benefits of 'personalized psychiatry' to children with ADHD.'

The study was carried out in Taiwan, where diets often contain plenty of fish compared to diets in Europe and North America. Most studies of children with ADHD, conducted largely in Western countries, have shown average blood-levels of EPA that are lower than in the current study.

Professor Kuan-Pin Su, the co-lead researcher from China Medical University in Taichung, Taiwan, said: 'High blood-levels of EPA without using supplements can be achieved through a good diet with plenty of fish, which is common in some Asian countries like Taiwan and Japan. It is possible that EPA deficiency is more common among children with ADHD in countries with less fish consumption, such as in North America and many countries in Europe, and that fish oil supplementation could, therefore, have more widespread benefits for treating the condition than in our study.'

Your Smartphone Might be Responsible for ADHD!
Smartphone notifications can influence people's mind, contributing to ADHD. Switching the phones to silent mode can minimize the effects of smartphone interruptions.
READ MORE