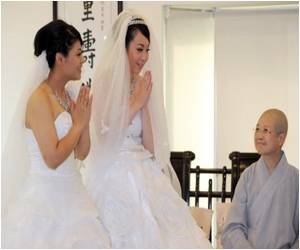 Two women became the same-sex couple to marry in Oaxaca, after the Supreme Court found the state's definition of marriage unconstitutional.

Mexico City is the only jurisdiction in the deeply Catholic country that has authorized same-sex marriage.


But in December, the top court ruled that Oaxaca's civil code, which states that marriage is only between a man and a woman for the purpose "to perpetuate the species," violates the constitution.


The Oaxaca Front for the Respect and Recognition of Sexual Diversity, which had taken part in the legal challenge, announced on Thursday that two women got married on March 22 during a private ceremony.

The two women, along with two other gay couples, had appealed to the Supreme Court after Oaxaca state authorities refused to marry them.

Gay rights groups have voiced hope that the court ruling would pave the way for the legalization of same-sex marriage across Mexico.

Argentina is the only Latin American country to authorize such marriages, while Uruguay is considering a similar law.

News A-Z
A B C D E F G H I J K L M N O P Q R S T U V W X Y Z
News Resource
News Category
World Vegan Month: What are The New Standards for Beauty? Personality Traits can Lead to Binge-Watching How to Stay Strong as You Age? Tips to Be Prepared for Food Supply Issues During Thanksgiving Is Safety Your Priority When Opting for Salon Services At Home?
More News
Sign up for Wellness Consult a Doctor Sign up for Selfcare
What's New on Medindia