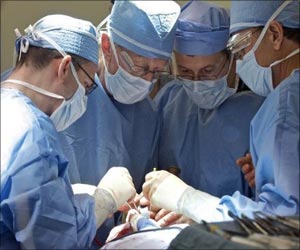 The first estimation of how genomic copy number variation (CNV) can influence anesthetic sensitivity and the magnitude of this influence can be gauged by a study published in the July issue of Anesthesiology.

CNV is a sometimes naturally occurring halving or doubling of a block of genes in an organism. This means that there is either a 50-percent increase or a 50-percent decrease - by genetic duplication or deletion - of the effects or traits generated by that specific block of genes.

In the study, the fruitfly Drosophila was genetically engineered to mimic the kind of CNV that is found in humans. Howard A. Nash, M.D. and his research group from the Laboratory of Molecular Biology of the National Institute of Mental Health in Bethesda, managed to show that CNV does indeed have a significant impact on sensitivity to certain anesthetics.


"Individual patients and experimental animals show a great amount of variation in sensitivity to volatile anesthetics," said Dr. Nash. "To our knowledge, this study is the first to demonstrate that changes in CNV contribute significantly to such variability, and our work should serve to stimulate and guide the examination of the way this type of genetic polymorphism impacts the clinical use of volatile anesthetics."

Volatile anesthetics are general anesthetic drugs that are liquid at room temperature but which evaporate readily for inhalation.

In a companion editorial to the study, Max B. Kelz, M.D., Ph.D., and Eliot Friedman, M.D., of the University of Pennsylvania School of Medicine, said that researchers are just now beginning to understand the important role that CNV plays in genetic variability in humans. CNV could be especially important for anesthesiologists.

"One key question for anesthesiology is the clinical relevancy of genetic diversity in the day-to-day practice of anesthesia," said Dr. Kelz. "It is conceivable that CNV might contribute to the diversity in anesthetic responsiveness, including a study subject's resistance to or hypersensitivity to anesthetics. Among the many interesting ways CNV could manifest are awareness under anesthesia or delayed emergence from anesthesia."

Dr. Nash used deletions in 50 percent of the flies' total genetic makeup before exposing them to the volatile anesthetic halothane. Because the entire genome of the Drosophila has been completely mapped and sequenced, discovering which genes are having what precise effects can be done much more effectively than in humans, whose genome has not yet been fully mapped.

For anesthesiologists, studies such as Dr. Nash's are meant to be stepping stones for better understanding how gene variance can predict an individual's reaction to anesthetics. These results suggest that CNV and its effect on anesthetics will be an important subject of study in future trials.

"Changes in CNV thus take their place within the spectrum of genetic aberrations that significantly influence anesthesia in flies," said Dr. Nash. "And current efforts are exploring how CNV influences the effectiveness of various drugs in patient populations. Our experience with Drosophila suggests that it would be worthwhile to include volatile anesthetics in such studies."