First Indian to Hold Deputy Director General of WHO 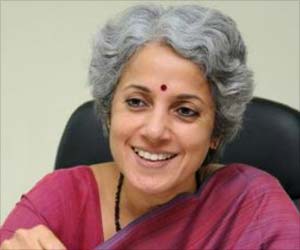 Dr. Soumya Swaminathan, a pediatrician and a clinical scientist by profession, has been appointed as the deputy director-general of the World Health Organization (WHO), in Geneva by Dr. Tedros Adhanom Ghebreyesus. Dr. Swaminathan has served as director general of Indian Council of Medical Research (ICMR).

Dr. Swaminathan will be holding the second-highest position at the United Nation's health agency. She also holds the post of Secretary of the Department of Health Research in India.

Advertisement
‘Dr. Soumya Swaminathan will be holding the second-highest position at the UNs health agency, and she also holds the post of Secretary of the Department of Health Research in India.’

"The team represents 14 countries, including all WHO regions, and is more than 60% women, reflecting my deep-held belief that we need top talent, gender equity, and a geographically diverse set of perspectives to fulfill our mission to keep the world safe," said Dr. Ghebreyesus.


"Every WHO member state gets a chance to nominate a candidate for the deputy's post, and it was India's turn this year. Dr. Swaminathan was India's nominee," according to a source in the Union health ministry who did not want to be named.
Advertisement
She will replace Dr. Anarfi Asamoa-Baah from Ghana, who joined WHO as a senior policy adviser to the director-general and had served as the assistant director-general of the communicable disease programme and the HIV/AIDS, Tuberculosis and Malaria programme.

Dr. Swaminathan, 58, has more than 30 years of experience in clinical research. She was the previous director of the National Institute for Research in Tuberculosis, Chennai. Soumya graduated from the Armed Forces Medical College in Pune, got her MD degree from the All India Institute of Medical Sciences (AIIMS), respectively.

Swaminathan's father, MS Swaminathan, is considered the pioneer of Green Revolution in the country. Her mother, Mina Swaminathan, is an educationist, and Chairperson of the study group on the development of pre-school children.

Tuberculosis, A Challenge To The Political Will Of Governments, Says Veteran Crusader
Tuberculosis is a global emergency and unlike the WHO reports recent claims of the disease leveling ...

Genital Tuberculosis Rapidly Increasing Among Women
Female genital tuberculosis is a rampant disease which is also growing as a major health issue that ...

Tuberculosis Bacteria Hide in the Body and Spreads Infection
Mycobacterium avium that causes tuberculosis, live in macrophages and the well adapted bacteria ......