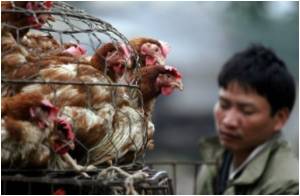 The first case of the H7N9 bird flu outside of mainland China was reported in Taiwan.

The 53-year-old man, who had been working in the eastern Chinese city of Suzhou, showed symptoms three days after returning to Taiwan via Shanghai, the Centers for Disease Control said, adding that he had been hospitalised since April 16 and was in a critical condition.