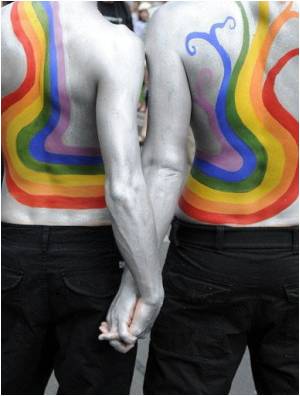 Some 16 years after homosexuality was decriminalized on the Mediterranean island, Nicosia held its first Greek Cypriot gay pride parade on Saturday.

Organisers Accept-LGBTI said a bill legalising homosexual civil partnerships promised by the government last year has still not been submitted to parliament.

China's first Gay Pride event, organised by Shanghai's English-speaking expatriates, has been quietly celebrating homosexuality this week with no hint of a parade or advertising hype.
Advertisement

The march left the capital's Eleftheria (Freedom) Square at around 6 pm (1500 GMT), with hundreds of waving and cheering people following a car decked with rainbow flags and blaring out music.


Police escorted the marchers, which included staff of embassies sponsoring the event, such as Austria, Canada, Denmark, Finland,Sweden and the United States, carrying their countries' flags.

UN urges Russia to repeal its controversial legislation banning gay propaganda because it is giving rise to discrimination and violence against young homosexuals and their families.
Advertisement
The parade headed for a park behind parliament, where Accept-LGBTI promised "a super-fun, celebratory party full of surprises, including... a spectacular, full-blown show by international artist A Man To Pet."

But spokeswoman Joanna Constantinuou said it was better the parade took "the form of a march for our rights than another Mardi Gras,"a reference to the annual carnival in the American city of New Orleans.

Earlier, a group called the Cyprus Christian Orthodox Movement held a counter-demonstration not far from where the march began.

Police kept the protesters, who included priests and monks, several hundred metres (yards) away without trouble.

Yanos Petrou, an organiser of the rival event, said "we don?t have a problem with the persons but they want too much; they shouldn't show those things" in public, referring to public displays of their homosexuality.

The influential Church of Cyprus has also reacted negatively to gays taking to the streets, saying it "regretted the behaviour and lifestyle of some of our fellow men."

The word of God condemns homosexuality, and such relationships are a "moral aberration", the church said, adding that it was not "a normal lifestyle choice."

British actor Stephen Fry, in comments to the Cyprus Daily, had called for a widespread show of support from the Cypriot public.

"I invite the Church of Cyprus to join the civilised and educated and loving world, including Christian faiths... to recognise the natural, unthreatening nature of homosexuality," said Fry, who is openly homosexual and has campaigned for gay rights across the world, notably in Russia.

"I encourage all Cypriots of whatever sexuality to join in the Pride March to show their support for an open, free, tolerant and enlightened Cyprus," he said.

Accept-LGBTI says it is holding the march to combat prejudice against what it claims is "10 percent of the population, hence against 85,000 Cypriot compatriots."

A second bill is before the Cyprus parliament that would criminalise anti-gay hate speech.

Golden Globe-nominated American actress Lainie Kazan, who starred in Hollywood comedy "My Big Fat Greek Wedding," has also come out in support of the LGBTI community on the divided island to "be who they are".

"We can?t hide in the shadows; that?s no way to live," said Kazan, starring in a new movie entitled "Oy vey! My son is gay!"

Turkish Cypriots living in the breakaway north of divided Cyprus narrowly beat their fellow islanders in the internationally recognised south to the draw with a "Queer Cyprus ... Rainbow Walk" on May 17 in the northern sector of Nicosia, the world's last divided capital.

But it was only this January that Turkish Cypriot deputies voted to legalise homosexuality.

Referring to homophobia on the island, Accept's Andreou said: "It depends on where you live, but you can be sure of facing discrimination in the workplace."