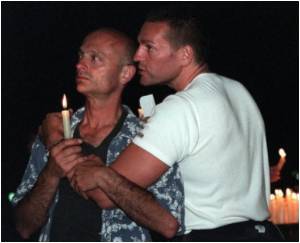 Kiev's district administrative court ruled that no events could be staged in the capital on Saturday because of City Day celebrations, the Interfax Ukraine news agency reported.

Activists had planned to hold Kiev's inaugural "Equality March" that day calling for an end to rampant discrimination against sexual minorities in Ukraine.


But opponents of the gay pride event announced plans for a huge alternative rally on the same day in support of family values and against the "promotion of homosexuality", raising the threat of violent attacks against the participants.
Advertisement
The city authorities said they had received more than 500 complaints from members of the public over the planned gay pride march, while 61 parliamentary lawmakers signed a letter calling for a blanket ban on all gay pride events in May and June.

In Ukraine, city authorities do not have the power to ban such public events but can ask a court to rule on whether they can go ahead.

The gay pride march's organisers said they intended to appeal the court decision and were also seeking to hold the event in a different format.

"We want to express our position, but we do not intend to breach the law," a spokesman for the organising committee told AFP.

In May last year the organisers themselves cancelled a planned gay pride rally over fears of violent clashes with opponents.

Amnesty International had urged city authorities to allow this year's march to go ahead and to ensure adequate security to protect the participants.

The United States Embassy and the European Union Delegation to Ukraine also expressed their support for the event.

The EU delegation called on local authorities and police "to effectively ensure that all persons can exercise their rights to freedom of peaceful assembly without putting their personal safety at risk."

Earlier this month the parliament of ex-Soviet Ukraine postponed a vote on a EU-backed bill that would have barred employers from firing staff because of their sexual orientation.