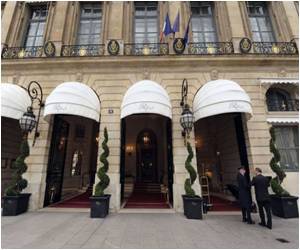 "If you take a shower before bed, make sure your hair is dry or it will freeze. Do not drink too much alcohol, or eat too heavy a meal. Make sure you change clothes before entering the room," hotel manager Annet van Limburg told first-time visitors.

In some heart-warming news, a winter wonderland on the outskirts of Quebec City has become one of Canada's hottest attractions
Advertisement

Laughing a little nervously, Luc van Heijst and Maya Zhang, both 42, listened carefully to her advice, their luggage stuffed with several pairs of pants, sweaters, gloves and hats.


"No, I'm not afraid, but I am still a little nervous," admitted Van Heijst, who is from Veghel, an hour-and-a-half's drive to the south. "We came for the experience," he said, adding: "I feel like a little boy."

Resident Lobby Cat of Algonquin Hotel on a Leash

City health police have asked Algonquin hotel to put its resident lobby cat on a leash.
Advertisement
Built for an ice sculptors' festival in Zwolle and managed by a local hotel, the structure has three rooms and stands in a refrigerated warehouse.

This is the now the most southerly ice hotel in Europe, van Limburg said. Indeed, the idea comes from the north of the continent.

With 47 rooms for the 2011/12 season, the largest ice hotel is at Jukkasjarvi in Lapland in northern Sweden.

"Unlike Canada and Lapland, the hotel here is not situated in nature," said van Limburg. "There, the guests sleep in minus 20 degrees."

Inside, abstract patterns carved into the ice adorn the metre-thick walls of two of the rooms. A third has a nautical theme, including a giant shell. A thick black curtain serves as a door.

Carved from a solid ice block, like a huge ice cube, the room's main attraction is a square bed, which lights up in pink, blue and green through lamps installed underneath in the ice.

It took about 10 days to build the three rooms, where guests can stay from December 3 to January 29. A night for two including breakfast costs 199 euros ($259).

"It's not dangerous if you're healthy," Van Limburg said.

As a back-up, however, a room at a real hotel has been set aside in case guests change their minds about their icy night's sleep.

The following morning, visitors van Heijst and Zhang seemed not to have suffered too much from their frosty experience.

"I wore three pairs of pants," van Heijst laughed, adding "I almost got too hot!"

He added: "It was a nice experience, but it's definitely for one night only.

"And definitely not for a holiday. We won't go to Lapland now that's for sure," he said.

Hotel in Bolivia Made Entirely from Salt

Global architecture continues to amaze after reports emerged of a hotel in Bolivia made entirely from salt
Advertisement
Advertisement
This site uses cookies to deliver our services.By using our site, you acknowledge that you have read and understand our Cookie Policy, Privacy Policy, and our Terms of Use  Ok, Got it. Close
×