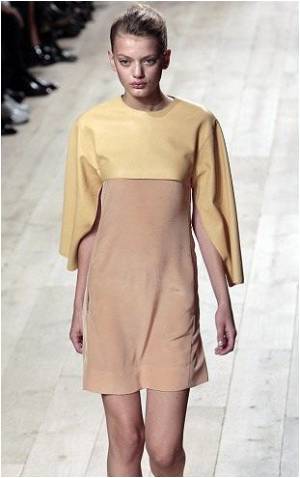 The first day of the Paris Fashion Week saw hippy explorers with daisies in their hair and watery themes inspired by rainbow trout which gave a naturalistic feel to a glorious event.

The eco-chic on display in Milan returned in young French designer Alexis Mabille's spring-summer show based around a romanticised desert hero, while the sea was central for Japan's Issey Miyake and his playful geometric suits.
Advertisement

French couturier Gaultier set a hotter, steamier but no less earthy mood as he raised the curtain on a stage full of muscle-bound bare-chested men in a massage parlour, who then flowed down the catwalk revealing a North African theme.

Gaultier's invite card had been a pair of 3D glasses, provided to create a "hallucinogenic mushroom effect" for the audience, as he explained after the show, "at least, I imagine," he added, "I have never taken any!"

The mushrooms might have been more popular with Mabille's models, walking down the runway with a touch of rouge on their cheeks suggesting lazy sunburn, hands in pockets and flowers or bits of grass ruffled through their hair.

The trademark bow-tie of the young designer, whose star has been rising since he dressed French President Nicolas Sarkozy's wife and former model Carla Bruni, was upstaged by the more ubiquitous daisy.

The little flowers were sprinkled everywhere as chunky broaches, around necks, or scattered from top to toe covering an elegant white satin outfit.

Religion was also a subtle but salient theme in the collections, suggesting a certain nostalgia for the orderly rituals of a faith-based life, in contrast with the fast-moving flux of contemporary social reality.

Mabille staged his collection in an elegant central Paris Protestant church and his models wore prayer beads around their wrists and were clad in leather Jesus sandals, while Gaultier put crucifixes around the necks of his men.

Fujiwara's muse had been the rainbow trout, that "master of disguise... cautious... patient", but when pouncing for its prey would reveal a flash of brilliant silver in the water.

The humble but cunning trout, Mabille's "Little Prince" and Gaultier's North African masseur expressed a worldly, dynamic, wholesome male at Paris fashion week, as glamour merged with the trees, the sand dunes and the sea.