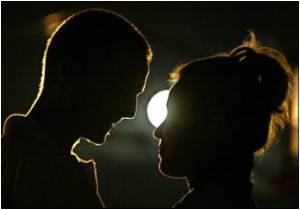 A Brit couple planning on a nice little sex game handcuffed themselves and then when things turned wrong had to rush to a fire station to get rid of the iron--all hot and embarrassed.

Simon Garvey, 29, and Katie McManus, 21, went red when the key broke in the lock and they realised they were stuck together.

The pair had no other option - they hurriedly dressed and trotted down to the local fire station where ten sniggering firemen cut off their cuffs.


"It was the most embarrassing moment of my life. What seemed like a funny idea when we were drunk turned into a nightmare," the News of the World quoted Katie, as saying.

Pub manager Simon had just succeeded in asking out Katie for their first date after fancying the barmaid for quite sometime.

He said: "I was really chuffed when she agreed to go out. But I never imagined it would work out like this."

The pair had a few drinks at the bar where Simon works before heading for his flat in Bury, Lancs.

Simon recollected: "We were a bit tipsy.

"It seemed like one minute we were chatting in the bar, the next we were back at mine ripping each other's clothes off.

"Katie is a great looking girl, and when I saw her body I knew I was in for a fantastic night.

"I thought I may as well push my luck and grabbed the handcuffs from the side of the bed. I cuffed Katie's wrist to the bed and the next thing I knew she'd fastened herself to me.

"We were stuck fast but we didn't care. We had great sex, it was good fun and then we fell asleep."

However, the cuffs wouldn't come off when the duo tried to undo them the next morning.

Simon said: "The key snapped in the lock. We knew we were in real trouble then.

"In the end there was nothing else for it. We had to call the emergency services. I was embarrassed and Katie was horrified."

Katie said: "We were hopping around trying to pull on our underwear. Getting dressed while chained together was the least sexy thing I've ever done."

With Katie dressed in jogging bottoms and one of her arms in one of Simon's T-shirts, the pair arrived at the Bury Fire Station only to be greeted by ten smirking firefighters.

Katie recalled: "I was hardly decent. I could have died on the spot. They were lined up laughing and clapping as we arrived."

The firemen used bolt cutters to remove the cuffs and set the pair free.

A Greater Manchester fire spokesman said: "It's one of the most memorable incidents we've dealt with in some time."

Is sex addiction a malady that can be treated or is it only an excuse for celebrity romps?
<< Belgians Support Public Smoking Ban: Poll
Smiling Tips to Influence People's First Impressions of You >>