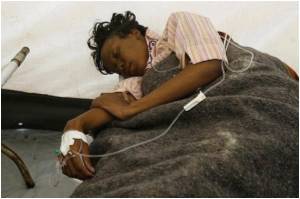 The first death from a cholera outbreak that had spread from neighboring Haiti has been reported by officials in the Dominican Republic.

Health officials were quoted as saying the victim had been in Haiti and lived in the Dominican city of Higuey.

A health ministry statement said Renauld Francois, 53, died Thursday, and that an autopsy would be performed to learn the exact cause of death but that his symptoms were "consistent with the disease."


The Dominican Republic has reported 152 cases of cholera since the outbreak in Haiti last year.

In Haiti, officials say 3,889 people have died since the discovery of the epidemic in mid-October through January 16, out of 194,000 infected.

Greenhouse effect causes excessive heat to build up in the earth's atmosphere causing global warming and affects the environment and health.
Advertisement
<< Food of the Future: Bug Mac?
The Fight for Healthy Teeth >>