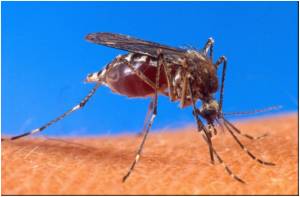 For the first time chikungunya, the mosquito-borne disease has spread in the western hemisphere confirms the World Health Organisation (WHO) Tuesday, observing cases of chikungunya in the Caribbean island of Saint Martin.

"As of 10 December 2013, altogether two confirmed, four probable and 20 suspected cases of chikungunya infection have been reported," the WHO said in a statement.

"This is the first time that locally acquired transmission of chikungunya has been detected in the WHO Americas Region."


Chikungunya is a viral disease, carried by Aedes mosquitoes, which attacks the joints, causes fever, headaches and arthritic-type symptoms and, in extreme cases, death.

The cases were registered on the French side of St. Martin, which is divided into two parts, governed by the Netherlands and France, the WHO said.

Health watchdogs on both sides of the island "are cooperating closely," carrying out measures to control mosquito breeding sites and advise people on how to protect themselves, it said.

There are no travel or trade restrictions, it added.

Saint Martin was hit by an outbreak of dengue fever in January. The chikungunya was detected after doctors, examining five patients reporting joint pains and fever, ruled out dengue.

There is no vaccine or treatment for chikungunya, which has infected millions of people in Africa and Asia since the disease was first recorded in 1952.

An outbreak on the French Indian Ocean island of Reunion in 2005, spread by the Asian tiger mosquito (Aedes albopictus) infected a quarter of the population in less than two years, causing some 250 deaths.

In 2007, Europe reported its first locally-transmitted case, as opposed to cases that occurred among visitors. It was a small localised outbreak in northeastern Italy.

The name "chikungunya" derives from an east African word meaning "that which bends up," referring to the way that patients are stooped over in pain.