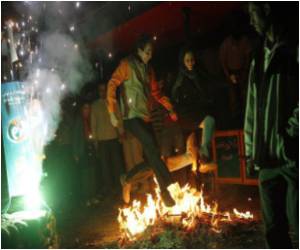 Charshanbe Soori, an ancient pre-Islamic festival, is held on the eve of the last Wednesday of the Iranian calendar year and is often seized as an opportunity to protest -- implicitly or explicitly -- against the government.

Iranians on Monday went on a gift-buying spree for their loved ones for Valentine's Day, witnesses said, despite a ban on the sale of items giving expression to the annual romantic ritual.
Advertisement

This year, the ritual falls on the night of March 15.


Avaie asked "young people and their families to act wisely and logically to avoid being trapped by the counter-revolution", warning that the judiciary will take action against all those who "disturb the peace."

Iran's State television has been banned from screening cooking shows that promote foreign cuisines.
Advertisement
The festival is a prelude to Nowrouz, the Persian New Year which starts on March 21 and marks the arrival of spring.

Iranians celebrate the occasion by lighting bonfires in public places and leaping over the flames shouting, "Give me your redness and I will give you my paleness," with red symbolising good health.

Opposition websites warned some three weeks ago they would incite street protests on the day of the festival if the isolation imposed on opposition leaders Mir Hossein Mousavi and Mehdi Karoubi had not been lifted.

But the sites issued no fresh protest calls on Monday.

Last year, Iran's supreme leader Ayatollah Ali Khamenei urged Iranians to shun the festival as an un-Islamic event which causes "a lot of harm and corruption" and has no "basis in sharia", Islamic religious law.

Police also cautioned parents against the use of dangerous firecrackers by their children as each year hundreds of people are injured in accidents.

Ahead of the festivities, the police announced the seizure of more than 10 tonnes of fire crackers and hazardous flammable and explosive devices.

A heart-wrenching documentary about AIDS sufferers in China and the discrimination they face in their daily lives has won a rapturous reception at the Berlin film festival.
Advertisement
<< Sexual Addiction - A Mental Disorder?
Snake Dies After Biting Model's Silicone Breast! >>