Findings on Use of Medical Marijuana in Treatment of Brain Diseases 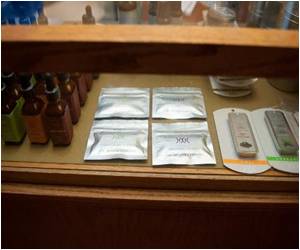 But they do not appear to be helpful in treating drug-induced (levodopa) movements in Parkinson's disease. Not enough evidence was found to show if medical marijuana is helpful in treating motor problems in Huntington's disease, tics in Tourette syndrome, cervical dystonia and seizures in epilepsy. The review is published in the April 29, 2014, print issue of Neurology®, the medical journal of the American Academy of Neurology (AAN), and will be presented at the AAN Annual Meeting in Philadelphia, April 26-May 3, 2014, which is the world's largest gathering of neurologists.

No Increase in Use of Marijuana Among Adolescents After Medically Legalized

There is finally a sigh of relief by the parents and physicians concerned about an increase in adolescent's marijuana use following the legalization of medical marijuana.
Advertisement

"This review by the world's largest association for neurologists is intended to help neurologists and their patients understand the current research on medical marijuana for the treatment of certain brain diseases," said review author Barbara S. Koppel, MD, of New York Medical College in New York and Fellow of the American Academy of Neurology. "The AAN review also highlights the need for more high-quality studies of the long-term efficacy and safety of medical marijuana in the treatment of neurologic diseases."


The AAN review concluded that certain forms of medical marijuana (only in pill or oral spray form) can help treat some symptoms of MS. These include spasticity, certain types of pain (pain related to spasticity, including painful spasms, and painful burning and numbness) and overactive bladder.

The risk of unsafe driving increases in teenagers who drink alcohol and smoke marijuana, reports a study in the May issue of Journal of Studies on Alcohol and Drugs .
Advertisement
Most of the MS studies examined pill or oral spray forms of medical marijuana. There were two studies that examined smoked medical marijuana for treating MS symptoms. However, the studies did not provide enough information to show if smoked medical marijuana is effective. "It's important to note that medical marijuana can worsen thinking and memory problems, and this is a concern since many people with MS suffer from these problems already due to the disease itself," said Koppel.

For Parkinson's disease, the AAN review concluded that medical marijuana in the form of synthetic tetrahydrocannabinol (THC) pills likely does not help relieve abnormal movements that can develop in the late stages of the disease from the drug levodopa, which is the main drug used to treat shaking, stiffness and slowness of movements.

There are safety concerns with medical marijuana use. Side effects reported in at least two studies were nausea, increased weakness, behavioral or mood changes, suicidal thoughts or hallucinations, dizziness or fainting symptoms, fatigue, and feelings of intoxication. There was one report of a seizure.

Mood changes and suicidal thoughts are of special concern for people with MS, who are at an increased risk for depression or suicide. The studies showed the risk of serious psychological effects is about 1 percent, or one in every 100 people.

In general, medical marijuana is prescribed as a treatment for use only when standard treatment has not helped.

The review is endorsed by the American Autonomic Society, the American Epilepsy Society and the International Rett Syndrome Foundation.

Source: Eurekalert
Advertisement
<< Xenotransplantation may Help to Compensate for the Shortage...
High Doses of Antidepressants Increase Suicidal Risk in Chil... >>

Selfie Addiction Calculator Vent Forte (Theophylline) Drug - Food Interactions Indian Medical Journals Sinopril (2mg) (Lacidipine) A-Z Drug Brands in India Pregnancy Confirmation Calculator The Essence of Yoga Calculate Ideal Weight for Infants Sanatogen
This site uses cookies to deliver our services. By using our site, you acknowledge that you have read and understand our Cookie Policy, Privacy Policy, and our Terms of Use