Filipino Boy Gets Back Vision After Reconstruction Of Disfigured Face 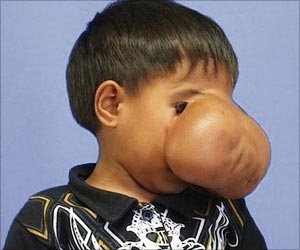 Melbourne surgeons have restored vision to a 7-year-old Filipino boy Jhonny Lameon after reconstruction of his disfigured face.

Jhonny Lameon suffers from a rare congenital defect called frontonasal encephalocele in which the neural tubes fail to fuse in the womb during fetal growth. As a result, brain matter and fluids bulge out from the skull in the form of a membranous sac.

In Jhonny's case, the protruding bulge was the size of a rock melon weighing about 1.5 kg, impairing his vision.


Almost his entire face, including the nose and mouth, got concealed behind the protrusion, and he had to every time lift up the protruding tumor in order to eat and drink.
Advertisement
Moreover, his disfigured face made him an object of derision.

However, his life started to change for the better when a team from a non-for-profit organization, Interplast, came forward to fly him over to Melbourne for treatment.

In March of this year, at Monash Children's Hospital, plastic surgeon James Leong, along with a group of volunteers, successfully performed a complex 8-hour surgery in which the huge-sized tumor was removed and brought his two eye orbits together.  They found the tumor contained fluid and a small amount of brain tissue.

Jhonny also underwent reconstruction of his nose with his rib cartilage.

Children First Foundation made accommodation arrangements for Jhonny, his mum Chochi and her 3-month-old son Jack.

After the surgery, the change to Jhonny's face was dramatic.

Dr. Leong said ''His condition is cured now, which is going to be fantastic for him.''

She said "I cry because I'm very happy."

Lameon also said that her son was desperately missing his nine other siblings and was eagerly waiting to return to school.

Congenital Cystic Adenomatoid Malformation Of The Lung
Congenital disease of the lung in which multiple cysts (water bubbles) develop in the lung tissues, ...

Cure For Sugar-Related Congenital Disorder
Mannose before mating and during pregnancy could forestall CDG-IA, an inherited metabolic disorder ....