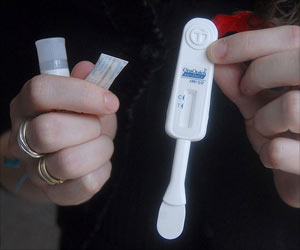 AIDS is a major problem in Homa Bay, a remote rural region on the southern shores of Lake Victoria. Studies have revealed that one in four people are HIV-positive.

Every day, a team from the medical charity Doctors Without Borders (MSF) led by Patrick Kibira Ochoro heads out on foot to reach the most isolated areas, going door-to-door in a bid to discuss, persuade and ultimately convince people to get tested for HIV.

Encyclopedia section of medindia gives general info about AIDS information and health education.
Advertisement
‘Since MSF's door-to-door awareness campaign began in August, 2015, some 5,200 people have been tested for HIV. The NGO has also set up mobile clinics where people can come to be tested or even circumcised.’

Kibira said, "For a lot of people here, HIV is not really an issue to them. For them, the number one priority is food, water. That's why we talk to them, to ensure that they understand why it's important for them to go testing, at least once a year."

Encyclopedia section of medindia explains in brief about the prevention for AIDS/HIV
Advertisement
In the light of the alarming statistics, MSF has changed its approach and started reaching out to people rather than waiting for them to come to the charity for help.

There are a number of socio-cultural reasons why people in the area are more affected than others. Here the practice of 'jaboya' is commonplace whereby sexual favors are traded for fish. Prostitution is also widespread. And the tradition of 'wife inheritance' whereby a man marries a newly-widowed woman within his family is also common practice among the Luo people who live in the area. Before marrying a new husband, the widowed woman is required to have sex in order to 'purify' herself from her previous marriage.

The Luo, Kenya's third largest ethnic group, also practices polygamy. And even if it is not openly acknowledged, men often continue to keep lovers hidden away. The Luo also reject the tradition of circumcision, a practice recommended by the World Health Organization (WHO) which can reduce the risks of contracting HIV among heterosexual men by 60%.

Although treatment is widely available in Kenya - UN figures show that in 2011, 72% of those diagnosed as HIV-positive were being treated with anti-retroviral therapy - there are still many other obstacles to overcome.

Lawrence Oteng, minister of health in Homa Bay county, said, "Today, many of the challenges in combating HIV are socio-economic and cultural rather than bio-medical."

One of the biggest problems is the stigma surrounding those diagnosed with AIDS. Many are forced to hide their condition and sometimes end up not following their treatment properly. Oteng said, "We are still fighting stigma."

Accompanied by a village elder, the MSF team goes door-to-door trying to convince people to get tested for HIV. Kibira said, "We try to promote a family-centred approach, that involves them as a family. It's not easy. Some refuse, some become hostile, but if the counseling is good, they usually are very supportive."

Kibira further added, "The main challenge is getting the men," he said. "A lot of them don't want to be tested. Explaining how circumcision can help is also difficult. In Luo culture, sex is seen as a boost to the planting and harvesting of the land, and the idea of having to give it up - even if only for time taken to heal after circumcision - was initially seen in a negative light. When the VMC (voluntary male circumcision) started in 2008 or 2009, there was a big resistance from the Luo community. Circumcision at the time was very low. Now it is steady."

Kibira further added, "The younger generation is less attached to such cultural ideas, and they could eventually come around."

Since MSF's door-to-door campaign began in August, 2015, some 5,200 people have been tested. And the NGO has set up mobile clinics where people can come to be tested or even circumcised.

AIDS was first detected in early 1980s, among gays, Haitians and black Africans. HIV is a descendant of a Simian Immunodeficiency Virus.
Advertisement
<< Get Rid of Insulin! New Immunotherapy Shows Potential to Tre...
Men With Type 2 Diabetes Can Benefit From Testosterone Repla... >>

Sinopril (2mg) (Lacidipine) Selfie Addiction Calculator Blood Pressure Calculator Drug Side Effects Calculator A-Z Drug Brands in India Drug - Food Interactions Color Blindness Calculator Post-Nasal Drip The Essence of Yoga Noscaphene (Noscapine)
This site uses cookies to deliver our services. By using our site, you acknowledge that you have read and understand our Cookie Policy, Privacy Policy, and our Terms of Use