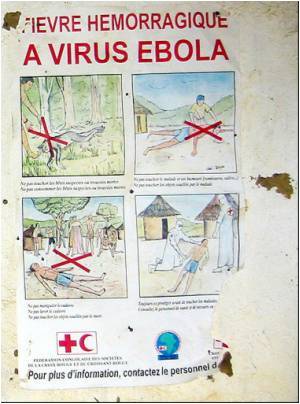 A family of small molecules that appear to bind to Ebola virus' outer protein coat and may inhibit its entry into human cells has been uncovered by scientists.

Ebola is a virus that causes deadly hemorrhagic fever in humans, has no known cure or vaccine.

Hope for Treating Ebola, Lassa, Marburg and Other Fast-acting Viruses

The sugar dish was the unlikely place to search for when a team of European researchers sought to discover how a class of antiviral drugs worked.
Advertisement

Duncan Wardrop, associate professor of chemistry at University of Illinois at Chicago and corresponding author of the new study, collaborated with UIC virologist Lijun Rong, who created a screening system that uses a chimeric HIV-Ebola virus bearing the protein coat of the Ebola virus. The chimera looks like Ebola but isn't life-threatening for scientists to work with.


After screening more than 230 candidate compounds, Wardrop and Rong found two molecules that inhibited cell entry, but only one that demonstrated specificity for the Ebola virus - plus a bonus.

Scientists have identified two biochemical pathways-PI3 kinase pathway and the CAMK2 pathway-that are vital for Ebola virus infection.
Advertisement
"We found that our lead compound also inhibits Marburg," Wardrop said, referring to a related virus that, along with Ebola, is one of the deadliest pathogens known.

"That was a nice surprise. There's growing evidence the two viruses have the same cell-entry mechanism, and our observations appear to point to this conclusion."

In an effort to find even more potent anti-Ebola agents, Wardrop and graduate student Maria Yermolina synthesized a series of derivatives of the lead molecule-a member of a family of compounds called isoxazoles-and found several that displayed increased activity against Ebola infection.

The results are to be published in the Journal of Medicinal Chemistry.

Dangerous viruses like Ebola and Marburg can now be quickly identified by a simple diagnostic tool developed by Boston University researchers.
Advertisement
<< Food Safety Could be Improved by Killer Paper
Study Finds How Anaesthesia Disturbs Self-Perception >>

Find a Doctor The Essence of Yoga Find a Hospital Post-Nasal Drip Indian Medical Journals Blood Donation - Recipients Turmeric Powder - Health Benefits, Uses & Side Effects Sinopril (2mg) (Lacidipine) Sanatogen Selfie Addiction Calculator
This site uses cookies to deliver our services. By using our site, you acknowledge that you have read and understand our Cookie Policy, Privacy Policy, and our Terms of Use