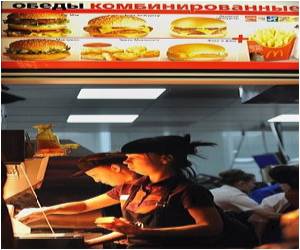 It stars some of the fittest athletes on the planet but health experts say the World Cup's positive lifestyle message is undermined by the choice of junk food giants to sponsor the tournament.

The tie-ups with McDonald's, Coca Cola and Budweiser are worth hundreds of millions of dollars to football's world governing body FIFA -- and some of that cash is subsequently invested in grass-roots sports projects.

FIFA hopes the 2010 World Cup will not see a repeat of 1994's Diego Maradona doping scandal, but if any players do get busted for drugs, Pieter van der Merwe will be the man who busts them.
Advertisement

But nutritionists in host nation South Africa worry that youngsters are particularly vulnerable to the association of their sporting heroes to food and drinks which are high in fats and sugar.


A recent report by the national Heart Foundation found that 29 percent of South African men and 56 percent of women are overweight.

Even youngsters are not immune to weight problems with 17 percent of children aged between one and nine classed as overweight.

South African AIDS organisations on Thursday accused football's governing body FIFA of blocking access to condoms and HIV education materials at World Cup stadiums and fan parks.
Advertisement
According to Thami Bolani, chairman of the National Consumer Forum, the tournament would have been the "perfect opportunity to educate all communities about healthy eating but we missed the boat on this one completely."

The World Cancer Research Fund, which says there is convincing evidence that excess body fat increases the risk of six types of cancer, said FIFA had been irresponsible in its choice of sponsors.

"It is disappointing that these companies have been chosen as sponsors and partners," said the charity's general manager Teresa Nightingale in reference to McDonald's, Coca Cola and Budweiser.

"We have to be realistic and accept that the existing sponsorship agreements are now in place.

"But it would be a great boost for public health around the world if FIFA could show real leadership on this issue by announcing it will not consider companies that promote unhealthy products as sponsors or partners in future."

The sponsors' logos appear on the screen throughout the matches shown on South African television underneath the score as well as on pitchside advertising hoardings.

With many viewers too entranced by the football to bother to cook, fast food companies hope that the World Cup will signal a sales bonanza.

Britain's Men's Health magazine has predicted that a viewer will pile on the equivalent of 1,913 calories if they drink four cans of beer, eat three slices of pizza, half a bag of potato chips and half a pot of dip during a game.

But Don Thompson, the president of McDonald?s, is a staunch defender of his company's links withh the World Cup and says that his firm offers a range of healthy food to customers.

"Food that McDonald's serve is the same thing people would get at a grocery store -- we have salads, fruits, chicken and beef," said Thompson. "We serve a wide a variety of food."

A spokesman for Coca Cola said it championed the message that "the key to a healthy, active lifestyle is a sensible, balanced diet and regular physical activity".

"People should be well informed about their choices," she told AFP.

Bolani also said that the government needed to counter a lack of knowledge about the impact of unhealthy eating.

"Maybe after the World Cup, the government will start with programmes of educating the public about the dangers of consuming high amounts of junk food and encourage parents to cook for their children," he said.

An expert has predicted that South Africa is almost certain to be hit by a major natural disaster, and, it could strike during this summer's World Cup football tournament.
Advertisement
<< Tattoos Now Go The Maori Way
Plastic Horns and Online Din This World Cup: Meet the Vuvuz... >>