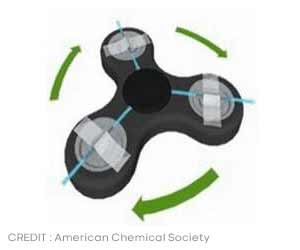 Blood plasma can be separated easily not only with a centrifuge but also with a fidget spinner. A new study finds that flicking the spinner with a finger three to five times can separate blood plasma for diagnostic tests. The findings of the study are published in the ACS' journal Analytical Chemistry.

Some people use fidget spinners -- flat, multi-lobed toys with a ball bearing at the center -- to diffuse nervous energy or whirl away stress. Now, researchers have found a surprising use for the toys: separating blood plasma for diagnostic tests. The new approach could be useful for medical applications in regions of the world that lack electricity and other resources.

Advertisement
‘Blood plasma can be separated easily with fidget spinner. A new study finds that fidget spinners can generate enough force to separate blood plasma with the flick of a finger.’

Before doctors can perform many types of blood tests, they must separate blood cells from plasma, the yellowish fluid that contains proteins, bacteria, viruses, metabolites and other substances that can be used to diagnose disease. This is most often accomplished by centrifugation, which uses high-speed rotation to sediment blood cells. However, centrifuges are expensive and require electricity that might not be available in resource-limited regions. Chien-Fu Chen, Chien-Cheng Chang, and colleagues wondered if a commercially available fidget-spinner could generate enough force to separate blood plasma with the flick of a finger.


To find out, the researchers placed human blood samples in tiny tubes, sealed the ends and taped a tube to each of the three prongs of a fidget-spinner. They found that by flicking the spinner with a finger three to five times, they could separate about 30 percent of the plasma with 99 percent purity in only four to seven minutes.
Advertisement
To verify that the plasma was suitable for diagnostic tests, the researchers spiked blood with a human immunodeficiency virus-1 (HIV-1) protein, separated the plasma with the spinner and performed a paper-based detection test. The inexpensive, simple method detected clinically relevant concentrations of the viral protein in only a drop of blood.

Autoantibodies - New Cause For High Plasma Triglycerides Identified
Hypertriglyceridemia is a condition that causes high triglyceride levels in the blood. ......

Motion Sickness / Travel Sickness
Motions sickness occurs due to the physiological imbalance between the eyes and inner ear when you t...