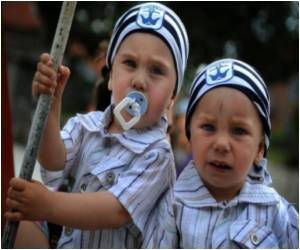 Difference in skills to distinguish faces is ingrained in the unique way wherein the mind of every individual perceives the look of another person, states a new study.

In daily life, we recognize faces both holistically and also "analytically", that is, picking out individual parts, such as eyes or nose. But while the brain uses analytical processing for all kinds of objects, cars, houses, animals, "holistic processing is thought to be especially critical to face recognition".

A British study suggests that the ability to identify a face, when it is shown for only a fraction of a second, reduces as people age.
Advertisement

"Face recognition is an important social skill, but not all of us are equally good at it," Jia Liu, the lead researcher from Beijing Normal University, said.


According to Liu, "individuals who process faces more holistically", that is, as an integrated whole, "are better at face recognition".

To isolate holistic processing as the key to face recognition, the researchers first measured the ability of study participants, 337 male and female students, to remember whole faces, using a task in which they had to select studied faces and flowers from among unfamiliar ones.

According to a twin study, face recognition is heritable, and it is inherited separately from general intelligence or IQ.
Advertisement
The next two tasks measured performance in tasks that mark holistic processing. The composite-face effect (CFE) shows up when two faces are split horizontally and stuck together.

It's easier to identify the top half-face when it's misaligned with the bottom one than when the two halves are fitted smoothly together, "because our brain automatically combines them to form a new", and unfamiliar, "face".

Liu also said that the other marker of holistic processing is the whole-part effect (WPE). In this one, people are shown a face, then asked to recognize a part of it, say, the nose. They do better when the feature is presented within the whole face than when it stands on its own among other noses: again, we remember the nose integrated into the whole face.

The researchers found that the participants who scored higher on CFE and WPE, that is, who did well in holistic processing, also performed better at the first task of recognizing faces. But there was no link between facial recognition and general intelligence, which is made up of various cognitive processes, a suggestion that face processing is unique.

"Our findings partly explains why some never forget faces, while others misrecognize their friends and relatives frequently," Liu added.

The study has been published in Psychological Science.

Our genes determine our ability to recognise faces, according to a study at UCL (University College London).
Advertisement
<< Simple Hearing Instrument from Panasonic
Engineered Body Parts Get Nearer to Reality >>

A-Z Drug Brands in India Sinopril (2mg) (Lacidipine) The Essence of Yoga Hearing Loss Calculator Drug Side Effects Calculator Pregnancy Confirmation Calculator Drug Interaction Checker Post-Nasal Drip Accident and Trauma Care Color Blindness Calculator
This site uses cookies to deliver our services.By using our site, you acknowledge that you have read and understand our Cookie Policy, Privacy Policy, and our Terms of Use  Ok, Got it. Close
×