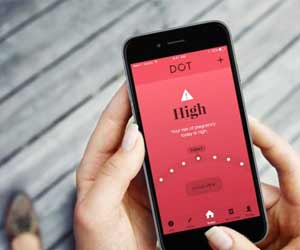 Fertility app 'Dot' has the potential to reach many women with an unmet need for family planning, said researchers. Results of a first-of-its-kind prospective study with a family planning app find it to be as effective as other modern methods for avoiding an unplanned pregnancy.

Researchers from the Institute for Reproductive Health (IRH) at Georgetown University Medical Center studied women's use of the Dot app over 13 menstrual cycles, or about one year.


Their study, published in the European Journal of Contraception and Reproductive Healthcare, is the first to test a fertility app using best-practice guidelines for assessing effectiveness of family planning methods. (13-cycle Perfect and Typical-use Effectiveness of the Dot Fertility App; Results From a Prospective Contraceptive Trial)


‘Using historical cycle data and a woman's period start dates, Dot's algorithm predicts pregnancy risk for each day of her menstrual cycle, flagging days of high and low fertility. As the app "learns" about her cycle over time, it personalizes a user's fertile window - the days of her cycle when pregnancy is likely.’


The researchers found that the app had a typical-use failure rate of 5 percent and a perfect-use failure rate of 1 percent, which makes Dot comparable to family planning methods such as the pill, vaginal ring, and other fertility awareness-based methods.

"More and more women are using apps as a family planning method, so having an option backed by strong evidence of effectiveness is critical," says Victoria Jennings, PhD, principal investigator of the Dot effectiveness study and director of the IRH. "Women must be able to base their app choice on solid evidence about how well the method works and what's involved in using it. That's why it was so important that an app like Dot undergo a rigorous effectiveness trial conducted according to established study guidelines used to study other methods."

Researchers applied a research software to the existing app that included pop-up reminders, surveys, and instant messages. Using this software, 718 participants were prospectively enrolled in the study and followed for up to 13 cycles of use, with fewer participants "lost to follow up" than is typical for an online study. Participants provided daily sexual history data for 6,616 menstrual cycles." There were 24 confirmed pregnancies from cycles when participants used the method incorrectly (such as having unprotected sex on days of high fertility). One pregnancy occurred in a cycle in which the participant used Dot correctly.

The participant profile reflected the general United States population of women 18-39. The researchers found no association between pregnancy and sociodemographic characteristics such as age, ethnicity, and relationship status.

"This is a particularly important finding because it suggests that Dot can be appropriate for a wide range of women," Jennings says.

New Fertility App as Effective as Modern Family Planning Methods: Study
Do you have a modern fertility app on your smartphone? Use of a family planning app known as Dot is as effective as other modern methods for avoiding unplanned pregnancy, reveals a new study.
READ MORE 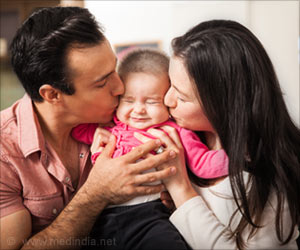 Contraceptive Implant can Help Boost Family Planning in India
The subdermal implant guarantees prevention of unwanted pregnancy for three years at least. It is 99 percent effective in terms of cost and use.
READ MORE