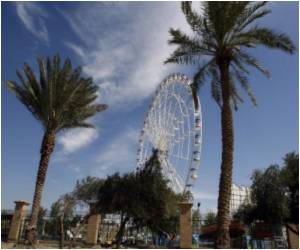 In an ambitious attempt to draw tourists to the city known now as the 'forgotten borough', the world's biggest Ferris wheel will be built on Staten Island.

The 230 million dollar attraction, to be called the New York Wheel, is to grace a spot overlooking the Statue of Liberty, New York Harbor and the downtown Manhattan skyline.

During their first outing since getting engaged in December, Haidar al-Saeedi and his fiancee dangled 55 metres (180 feet) over Baghdad, enjoying the view from a Ferris wheel that
Advertisement

Officials hope the views will add to the appeal of what they say would be the world's tallest Ferris wheel.


The 625-foot-tall structure would swing higher than the Singapore Flyer, the London Eye, and a 'High Roller' wheel planned in Las Vegas.

According to CBS News, the wheel would have 36 capsules, capable of carrying 40 people each.

Statue Of Liberty To Close For A Year For Giant Makeover

The Statue of Liberty in New York will close for a year from October 28 to undergo a 27.25 million dollar renovation.
Advertisement
Mayor Michael Bloomberg said in a release Thursday that "The New York Wheel will be an attraction unlike any other in New York City, even unlike any other on the planet."

The mayor's office estimates the wheel would draw as many as 30,000 riders per day and 4.5 million visitors a year, the report added.

Statue of Liberty Replica in Japan Looking for New Home

After being evicted from outside a shop in a historic Japanese port city following complaints from neighbours who branded it an eyesore, a replica of the Statue of Liberty is looking for a new home.
Advertisement
Advertisement
This site uses cookies to deliver our services.By using our site, you acknowledge that you have read and understand our Cookie Policy, Privacy Policy, and our Terms of Use  Ok, Got it. Close
×