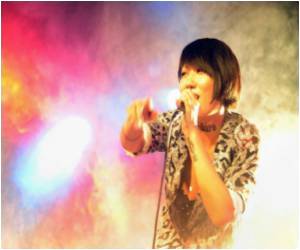 As the lead singer for SUBS, she is one of the first women in China to front a band pumping out loud punk music and was the opening act for a Beijing show marking International Women's Day on March 8.

Rocketing To A Speedy End

Rock and roll stars seem happy living the motto: Life on the fast lane, except that very often this lane has only one end ;death.
Advertisement

"I'm still a girl. Please don't call me a woman," she said with a wry smile.


"Tonight we are playing unplugged, no distortion, just clean, acoustic guitar," she said, adding that the band is playing with "wooden instruments" or "muqin," which in Chinese is a homonym for "mother."

For Handicapped Congolese, Music is Road to Riches

Music is a balm for all people regardless of race or ethnicity.
Advertisement
Kang Mao, a stage name meaning "fighting cat," refuses to reveal her real identity, age or hometown. Probably in her late twenties or early thirties, she insists she comes from Mars.

Now in its third decade in the world's most populous nation, rock and roll has faced tough government censorship, a lack of support on state-controlled airwaves and rampant piracy of music copyrights.

Yet more and more Chinese youths are picking up guitars and beating drums -- with women fronting a variety of bands as the country's increasing openness encourages many to break out of traditional female roles and sample new lifestyles.

Founded in 2003, SUBS has released four albums and earlier this month the quartet -- the other three members are men -- embarked on a 22-city, 37-day tour of China, including Hong Kong, that will mainly play small underground clubs and bars.

"We are promoting 'Queen of Fucking Everything,' our newest album," said Kang Mao.

"I think we will be making some money on this tour. How much is hard to say, but I can tell you, SUBS is no longer losing money," Kang Mao, who has traded a mohawk haircut for long flowing black hair, said between swigs of beer.

But it remains a spartan life. The band will travel on public buses and trains, sometimes departing cities immediately after a gig and arriving at the next destination early the next morning to save on hotel bills.

Nationwide tours are becoming increasingly common for Chinese rock bands, most of which have made names for themselves in Beijing -- the country's rock hub -- with its many live music venues and vibrant summer rock festivals.

"Beijing is just a natural place to come to play rock music because as the capital it is the most open to new types of music and art," said Wang Jing, lead singer of Bigger Bang, a band she co-founded in 2008 and named after a Rolling Stones album.

Wang, 27, who sports a three-inch tattoo of the word "ENDURE" across the front of her neck, is originally from the southern Chinese city of Guangzhou, where she formally studied at a music institute.

"But you have to love the music, you have to do it for the fun and the enjoyment of performing," she said, before rocking the Women's Day crowd with a version of the band's punk-funk anthem "Cry of Youth" while prancing across the stage in a set of bright pink tights.

Bigger Bang is fresh from signing a record deal and hopes to have its first album out this year.

"I think the future of rock and roll in China is bright," said Wang Hui, lead singer of the Chinese Hellcats, an eight-piece swing band that plays covers of American jazz and rhythm and blues standards.

"We are all optimistic about the future, but you cannot be playing rock for the money, you have to do it to make people happy," she said.

The tiny 33-year-old, who hails from southwest China's Sichuan province, is the wife of Wang Jian, who plays lead guitar for both the Hellcats and Brain Failure, arguably China's leading punk band.

There's A Biological Basis to Our Love For Music

In a new study, researchers have examined the biological basis of listening to music.
Advertisement
<< Tsunami Victims' Families Deal With the Looming Loss
20,000 Underage Users Turned Away By Facebook, Every Day! >>

Children Can Pick Up Infections By Playing Used Musical Instruments

Blood Donation - Recipients Blood Pressure Calculator Find a Doctor Accident and Trauma Care Vent Forte (Theophylline) Drug Side Effects Calculator Calculate Ideal Weight for Infants Hearing Loss Calculator Sanatogen Blood - Sugar Chart
This site uses cookies to deliver our services. By using our site, you acknowledge that you have read and understand our Cookie Policy, Privacy Policy, and our Terms of Use