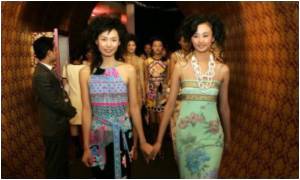 Most female graduate students in Shanghai are empathetic towards other girls who are lovers of rich men or who work at night clubs, according to a new research.

The Journalism School of Fudan University conducted the study in June with more than 900 female students at the city's 17 universities who graduate this year. About 40 percent were from Shanghai, while the rest were from other parts of the country, reports the China Daily.

In the survey, nearly 70 percent showed an understanding attitude toward living together before marriage. Thirteen percent said they were ok with it if their boyfriends wanted it, almost 7 percent think living together is romantic and is a way to make hearts grow fonder, while 10 percent said it is indecent.

Although more than half of the female students show a lenient and understanding attitude toward other people's sexual choices, 74 percent said they had not had sex before and 82 percent oppose "having sex without love".

Meanwhile, 71 percent said sex outside marriage harms the family and society's stability, and should be prohibited.

Liao Shengqing, an associate professor at Fudan University's journalism school and the leading researcher of the survey, said the students' attitudes come from their respect for individual privacy. They regard sex as a private matter and respect other people's choices.

Source: ANI
Advertisement
<< Sexual Agreements are Agreed Upon by Gay Couples to Foster ...
Pedaling on a Stationary Bike for a Free Meal >>