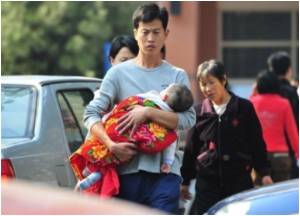 A father's involvement in pregnancy could be a vital factor in bringing down infant mortality, states a new study.

A new study has pointed out that toddlers get more breathing space from their fathers, which encourages them to explore their environments better.
Advertisement

Now, a new study by University of South Florida researchers suggests that a father's involvement before his child is born may play an important role in preventing death during the first year of life - particularly if the infant is black.


The USF team sought to evaluate whether the absence of fathers during pregnancy contributes to racial and ethnic disparities in infant survival and health.

Medindia offers a milestone chart for the growing child, by which we can determine the activities of the baby at various stages of the growth.
Advertisement
"Our study suggests that lack of paternal involvement during pregnancy is an important and potentially modifiable risk factor for infant mortality," said the study's lead author Amina Alio, research assistant professor of community and family health at the USF College of Public Health.

"A significant proportion of infant deaths could be prevented if fathers were to become more involved," Alio added.

Their findings were recently reported online in the Journal of Community Health.

A father's influence upon a child's academic success later in life is felt the most when he's involved from the very beginning, according to a new study.
Advertisement
Advertisement
This site uses cookies to deliver our services.By using our site, you acknowledge that you have read and understand our Cookie Policy, Privacy Policy, and our Terms of Use  Ok, Got it. Close
×