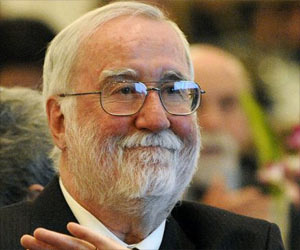 Dave's colleagues at McMaster and Cochrane plan to commemorate his contribution to evidence-based medicine in various ways, including The Dave Sackett Research Symposia and during the 23rd Cochrane Colloquium in Vienna in October 2015.


A memory book will be available online on the Cochrane Community site for friends and contributors to express condolences, recount memories, and share photographs. Donations can be made to the David L Sackett Scholarship fund via McMaster University Giving.
Advertisement
Tributes Pour In

"Dr. David Sackett was a wonderful man who propelled McMaster into the international spotlight, a reputation we still enjoy today," said Dr. John Kelton, dean and vice-president of the Faculty of Health Sciences, McMaster University.

Holger Schunemann, chair of the Department of Epidemiology and Biostatistics of the Michael G. DeGroote School of Medicine, added: "David Sackett was a true transformer of health care. He questioned established beliefs, and explored emerging areas. His legacy is carried forward through his influential role on clinical trials, systematic reviews, evidence-based medicine and health education worldwide."

Murray Enkin, professor emeritus of obstetrics and gynecology, said: "He really lived while he lived, enjoyed life, contributed to science, to humanity, to his students, to his colleagues, to all of us. To me he taught just about everything I know of any importance." "Dave was an inspirational leader, teacher and mentor, which assures that his legacy will endure and grow," said Brian Haynes, a professor of clinical epidemiology and biostatistics and a former student of Sackett.

Gord Guyatt, a Distinguished University Professor of clinical epidemiology and biostatistics, said: "Dave Sackett was an inspiration to all who knew him. His generosity, kindness, brilliance, innovation and deep commitment to science and to improving patient care provided a role model for more than one generation of clinical researchers and students."

More About His Life

Born in Chicago, Illinois, Dave Sackett was an originator of clinical epidemiology and evidence-based medicine and the first chair of the Cochrane Collaboration Steering Group in 1993. He founded the first department of Clinical Epidemiology and Biostatistics in the world, at McMaster University in Hamilton, Ontario, in 1967 and founded the Oxford Centre for Evidence-Based Medicine in the UK in 1994.

Dave contributed extensively to the development of research methods through his books and published articles, as well as through education and lectures at McMaster and around the world. Notably he turned clinical research into a scientifically sound and practical multidisciplinary "team sport," and has changed for the better the quality of healthcare research and clinical practice.

After obtaining his medical degree at the University of Illinois, Dave went on to train in nephrology and internal medicine, and earn a Master of Science in Epidemiology from Harvard University. He was a former Physician-in-Chief at Chedoke-McMaster Hospitals, and Head of the Division of General Internal Medicine for the Hamilton, Ontario region. In 2000, he was inducted into the Canadian Medical Hall of Fame, and a year later was made an Officer of the Order of Canada. Dave was the recipient of the 2009 Gairdner Foundation Wightman Award.

He retired from clinical practice in 1999 at the age of 65, and returned to Canada to establish the Trout Research & Education Centre, where he researched, wrote, and taught about randomized clinical trials. He has published 10 books, chapters for 50 others, and over 300 papers in medical and scientific journals.

Dave's contributions to Cochrane's work date from the earliest days of the organization have made a substantial impact on its development and reputation over the past two decades.

Thorough Healthcare Can Only be Done With Evidence-based Medicine
Evidence based medicine (EBM) welcomes the use of evidence from a well-documented research in ......

Tissue Engineering and Regenerative Medicine
This new field is an amalgamation of biology, medicine and engineering, and is believed to have ......

Choose The Right Over-the-Counter Drugs for Allergy
Over-the-counter (OTC) drugs can be bought without a prescription. OTC allergy medications are for ....