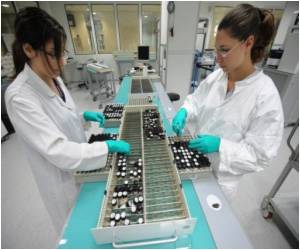 A pathogen annually blamed for an estimated 90 million cases of food-borne illness defeats a host's immune response by using a fat-snipping enzyme to cut off cellular communication.

This was reported by researchers at the UT Southwestern Medical Center.

"Our findings provide insight into severe bacterial infectious diseases, as well as some forms of cancer, in which the attachment of fat molecules to proteins is an essential feature of the disease process," said Dr. Neal Alto, assistant professor of microbiology and senior author of the study in today's print edition of Nature. The study's first author is Nikolay Burnaevskiy, a graduate student in microbiology.


The research group discovered a scissor-like enzyme that specifically cuts off functionally-essential fatty acids from proteins. "The one we studied in particular - a 14-carbon saturated fatty acid called myristic acid- has received a lot of attention due to its crucial role in the transformation of normal cells to cancer cells and for promoting cancer cell growth," Dr. Alto said.
Advertisement
Because of the fat's importance in human disease, researchers have tried for years to identify effective methods to remove them from proteins. "To our amazement, bacteria have invented the precise tool for the job," Dr Alto said.

The bacteria used in this study, Shigella flexneri, are able to cross the intestinal wall and infect immune cells. Other intestinal bacteria, such as E. coli, are unable to do this. Once Shigella encounters immune system cells, including white blood cells such as macrophages, the bacteria use a needle-like complex to inject the cells with about 20 bacterial toxins.

The UTSW researchers conducted a series of experiments to characterize one of those toxins, called IpaJ, chosen in part because so little was known about the protein. They not only discovered IpaJ's fat-cutting ability, but also determined how the protein disables the immune system's communication infrastructure, which Dr. Alto compared to knocking out a bridge needed to deliver a package.

"Normally, a macrophage will engulf an invading bacteria and send out cytokines, proteins that act as cellular alert signals, which in turn recruit more immune cells to the site of infection," Dr. Alto said. "When the macrophages engulf Shigella, however, the bacteria use IpaJ to cut fatty acids from proteins, which need those fats attached in order to sound the alarm. Doing so buys more time for the bacteria to grow and survive."

"It's very interesting from a disease process point of view, but it's also important because we now have a potential drug target," said Dr. Alto. The next step, he said, will be to identify small molecule inhibitors that are specific to this fat-snipping protease and that might be developed into drugs.

Source: Eurekalert
Advertisement
<< Australian Children Develop Better Than Before
All Patients Do Not Benefit Equally from Hip or Knee Replac... >>

More News on:
Infectious Mononucleosis Food Preservatives - How Safe Are They?

White Blood Cell Enzyme-Inhibitor Imbalance Causes Inflammation and Obesity
Researchers have discovered that an imbalance between an enzyme called neutrophil elastase and its ....

Scientists Map Fountain of Youth Enzyme
For the first time, scientists have mapped telomerase, an enzyme which has a kind of rejuvenating .....

CoQ10
Vitamin-like CoQ10 helps generate energy for the cells to function at their optimum level. ......