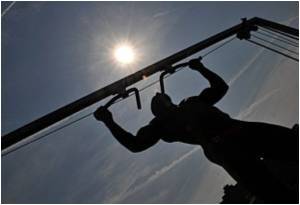 Fat-reducing treatments that supposedly involve 'zapping', 'dissolving', 'melting', 'vaporizing' are under scrutiny to check out how appropriate these claims are.

Some companies are charging as much as 6000 dollar for 'fat-dissolving' injections, while others promise to 'liquefy' your flab.

Two Melbourne companies are being investigated by the Therapeutic Goods Administration (TGA) to determine whether their claims breach the law.


The medical regulator is scrutinising FatZap, which has centres across Melbourne and is charging up to 3000 dollar for a treatment that promises to 'zap' customers into shape.
Advertisement
They have claimed their 'state-of-the-art' machines can help reduce fat, cellulite, stretch marks and saggy skin by using 'radio frequency controlled volumetric heating of the skin', and an ultrasound beam that 'targets fat cells, bringing them to self resonance'.

If the companies are found to be making medical claims, which are not backed by scientific evidence, they could be ordered to withdraw their advertisements.

A spokeswoman said the TGA is "concerned about alternative treatment providers making health claims that cannot be substantiated and that have the potential to mislead consumers".

The Victorian president of the Australian Medical Association, Harry Hemley, said tighter regulation of the industry was needed to protect the public.

"At best you may just be left out of pocket, but at worst the therapy could actually cause you harm," the Age quoted Hemley as saying.

In an emailed statement, a spokesman said FatZap was not a weight-loss program but a method of "removing localised areas of fat".

The spokesman said studies in the Journal of Cosmetic and Laser Therapy and numerous clinical trials confirmed the efficacy of their machines, which have been registered by the TGA.